DUNCANNON, Pa. -- The new Rutter’s store in Duncannon, Pa., has what Ryan Krebs, director of foodservice, calls “a dream kitchen”: It’s huge, can handle several foodservice orders at the same time and—just as important—get them out quickly.

That speed is key because customers don’t want to wait anymore, says Krebs. The goal of York, Pa.-based Rutter’s is to make each order in four to six minutes and send guests on their way.

Getting customers in and out with their foodservice order as quickly as possible is critical for providers, especially as consumers eat away from home more than ever. About 80% of consumers purchase prepared food at least once a month, according to CSP’s sister research firm Technomic Inc., Chicago. And 44% say they are loyal to a specific store because of its prepared food.

As every operator, from restaurants and supermarkets to coffeehouses and truckstops, expands its foodservice offering, convenience stores need to deliver—fast.

“C-stores have done a great job in grabbing a bigger piece of the foodservice pie, and now they’re looking to dig deeper into that pie,” says Bev Cain, president of Sandelman, a restaurant market intelligence company in Nashville. “Speed is one of the areas where convenience stores need to step up their game to effectively steal share.”

Pittsburgh-based Giant Eagle is constantly working on fast service in its GetGo c-stores, 81 of which offer foodservice. “Speed is something we’re hyperfocused on,” says spokesperson Jannah Jablonowski. “Our customers really are on the go, and that’s the inspiration behind a lot of what we do. They also want a high-quality meal or snack and shouldn’t have to choose between speed and quality.”

One way Giant Eagle delivers on this promise is by placing touchscreens in the front of the store. This speeds up the foodservice transaction significantly, says John Schaninger, owner of The Schaninger Group in Upper Black Eddy, Pa. Through touchscreen systems, also in operation at Rutter’s, Wawa and Sheetz, customers can call up a prior order with the push of a button. And for the back of house, some of the systems direct disparate parts of the order to specific stations “so various parts of the order are fulfilled at the same time,” Schaninger says.

Touchscreens are a boon to speedy service, says Darren Tristano, CEO and founder of Foodservice Results, Chicago. A downside is that learning and adaptation can be slow with older consumers, “but once they get the hang of it, it can really help at peak times,” he says.

Rutter’s touchscreens rely heavily on the chain’s Rutter’s Rewards program for speed. Customers log in and the system brings up their last 12 transactions, allowing them to reorder at the touch of a button. It’s a feature that helps make short work of ordering more sophisticated dishes, including shrimp fried rice, fried pork belly sandwiches and bone-in beef short ribs. The entire process can take less than 30 seconds.

In January, Gaubert Oil Co. Inc. will start testing touchscreens at its GoBears c-store in Grand Coteau, La. The company, which is based in Thibodaux, La., and owns 16 GoBears c-stores, added the tech with the primary goal of speeding up service, as well as improving food freshness and easing its expansion into made-to-order food.

“The kiosk will help us keep pace,” he says. “Kiosks won’t save a failing unit, but they will help you stay relevant, stay modern and stay fast.”

Not all ordering is being done in-store. At the end of 2017, Altoona, Pa.-based Sheetz brought Alexa into the game, allowing customers to order pickup meals through Amazon’s virtual voice assistant.

The service is available at all of Sheetz’s 564 stores. Customers log into their Sheetz account online and choose their favorite order for store pickup. When hunger pangs start, they simply ask Alexa to order their favorite, then pick it up later.

Sheetz is following a trend that is already well-advanced in the restaurant industry at chains such as Starbucks, Pizza Hut, Domino’s Pizza and Dunkin’ Donuts. Panera Bread, which signed up with Google Assistant late last year, reported that ordering via Google is often more than 80% faster than ordering via an app.

“Kiosks won’t save a failing unit, but they will help you stay relevant, stay modern and stay fast.”

Voice ordering is just one piece of ensuring a fast, fulfilled foodservice order. Some operators are partnering with third-party delivery companies to help customers skip the trip to the store. These include Wawa, which has partnered with Uber Eats and Grubhub; QuikTrip, which has partnered with Uber Eats in Tulsa, Okla.; and 7-Eleven, which works with DoorDash and Postmates.

This spring, Giant Eagle joined forces with Grubhub, which is “making the ordering process that bit more convenient for folks,” Jablonowksi says. A few stores are involved in the partnership, the first of which was in Pittsburgh. There’s a $3 surcharge to use the delivery service.

Mobile ordering is another tech tool that can help speed up the foodservice transaction. The service, now offered by c-store chains such as Wawa, QuickChek and GetGo, allows customers to order a previous favorite with a simple click.

People like to see innovation, and that drives sales, but at the end of the day, people order the same items over and over again instead of experimenting, Schaninger says. 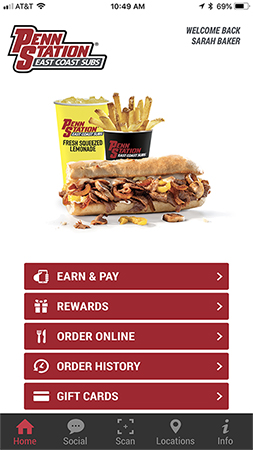 Wawa, Pa.-based Wawa is enjoying success with its mobile app, which ties in closely with its rewards app. Customer awareness of the offer is 67%.

One complication for c-store retailers that want to offer mobile ordering is the nature of the c-store shopping occasion, says Cain of Sandelman. In particular, because about half of c-store customers make purchases only because they’re buying gas, it’s not preplanned.

“So I think there will be a slower uptake in using a mobile app,” she says.

C-store operators are following in the footsteps of quick-service restaurants such as McDonald’s, which launched mobile ordering 18 months ago, and Penn Station East Coast Subs, which launched the service in the spring. The Cincinnati-based sub chain turned to mobile ordering because it seemed like the only way to provide faster service was to get customers’ orders earlier. The actual taking of the order is also significantly faster than the roughly five minutes required for each phone order.

“It allows us to manage our orders instead of waiting for the phone to ring, because some people place their lunch orders at 9 a.m.,” says Lance Vaught, vice president of operations.

To deliver on the speed promise, operators who offer mobile and online ordering also need to consider pickup logistics. Penn Station East Coast Subs and Panera Bread offer separate pickup areas so that a customer ordering through the app or website does not have to stand behind 15 guests waiting to place an order in person.

“This can be a double-edged sword: Customers don’t want to order in advance and have to then stand on line, but at the same time, you don’t want the customers waiting to order to see the people running in and grab their ready order,” Cain says. The trick is keeping the two pickup areas apart so there’s no clear sight line from one to the other, not making it obvious one line is moving faster than the other. This is easier for c-stores than restaurants because the food collection point and the payment point typically are separated.

With order ahead, customers can pick up at the dedicated line, from a drive-thru window or from a dedicated parking area. For example, McDonald’s has reserved parking spots at some restaurants where customers park and employees bring out their order.

Cain is a fan of designated parking spots. When paired with immediate pickup for mobile orders, “you can make it a little special” for customers who preorder their food, she says.

While ordering technology is one way to speed up the foodservice ordering process, faster back-of-house systems and procedures can also help zoom orders through.

Rutter’s Duncannon store has a kitchen with a separate, larger prep area. And it needs it: The store has the highest foodservice volumes in the entire chain. “Our volumes are mind-boggling,” Krebs says. “I ha

d to come up with a way to make it easier and more efficient on our staff.”

The goal was to remove all prep from the production area so employees could just feed the production line. “It’s worked out very, very well,” he says.

The prep kitchen, which runs the length of the kitchen, measures about 25 by 10 feet. It contains a full stand-up, double-door freezer and refrigerator; dry storage areas; a large prep table; and an oven, which keeps the upfront ovens ready for foodservice orders vs. cookies and muffins. Two employees typically work in the kitchen, but it can hold up to four.

For the production lines, Rutter’s has installed double make tables, which it tested in another store. These are similar to Subway’s refrigerated sandwich lines, Krebs says. Orders are split between the tables “so you have two teams, so it makes ticket times twice as efficient,” he says. “That’s an area that’s really bogged down otherwise.”

Workers at each table pass food to an expediter so “we’ve sped up fulfillment times,” Krebs says. Hot orders go to one make table and cold to the other, so it may be that two tables work on one order concurrently. It takes staff four to six minutes to deliver foodservice orders, which is acceptable to Rutter’s customers. “People understand they’re not going to get an item in a minute and a half,” Krebs says. “They want higher-quality, freshly made food with customization. We’ve trained people that it’s worth the wait.”

Space and technology can speed up the foodservice ordering and delivery process. However, if a retailer’s budget is too tight for much or any of both, it can emphasize customer service to deliver the perception of fast.

“If the person makes them feel glad they are their guests, people are willing to wait lots longer and say they’re satisfied with the speed,” Cain says. “With technology, we unintentionally forfeit that human touch to make someone’s day.”