WASHINGTON -- In the Washington area, gas station tacos are not front of mind. But thanks to Sunoco LP’s $1.9-billion acquisition of Susser Holdings Corp., the former owner of the Stripes convenience-store chain in Texas, Laredo Taco Co. appears to be headed north, reported The Washington Business Journal. 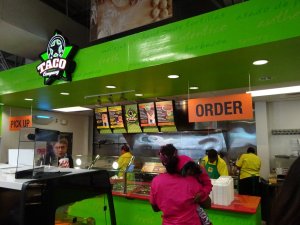 Core States Group, an engineering and architectural firm, recently filed a letter with Loudoun County with plans to update a Flagstaff Plaza Sunoco location in Ashburn, Va., with a Laredo Taco Co.

Found only in Stripes c-stores, the popular taco line is available in approximately 480 of the chain’s 679 locations in Texas, Oklahoma and New Mexico. Laredo Taco Co. bills itself as “fast, fun, friendly and delicious,” offering “generous portions of your favorite Mexican food, handmade with the freshest ingredients every day.” Its menu includes breakfast tacos, beef enchiladas and beef fajitas.

“Sunoco proposes to remodel the existing convenience store to include foodservice (Laredo Taco Co.) within the existing building,” the letter said.

Sunoco also plans to update the retail sales shelving “to their new standard equipment.” The gas station at that Ashburn location today is an Exxon, and the convenience store is a Circle K, said the report. It is unclear whether Sunoco will acquire the gas station site and rebrand it as an APlus or a Stripes, or if it will fit a Laredo Taco into the Circle K.

A Sunoco spokesperson was not immediately available for comment to the newspaper.

In other company news, Sunoco LP and Stripes owner Energy Transfer Partners LP plans to move more of its operations from South Texas to Dallas, where ETP has its headquarters, reported The Corpus Christi Caller-Times.

Stripes officials told employees on Nov. 13 it will open an office in Dallas, said the report, citing a company statement.

“This move allows our core corporate functions to operate from a region central to our expanding geographic footprint, and also close to our parent company’s headquarters,” the company said.

"We are going to manage the company in the best way possible to support our continued growth, and that includes having offices near our parent company in addition to those in our traditional markets," the company said.