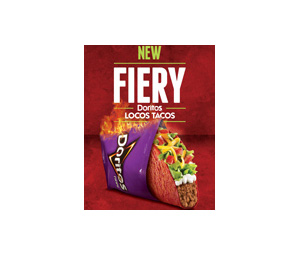 "Launching the first two Doritos Locos Tacos were obvious: Nacho Cheese is the top-selling Doritos flavor and our fans asked us for Cool Ranch. For the third DLT, we heard our customers as they told us they wanted something spicy and with flavor," said resident Brian Niccol. "So, in another Taco Bell first, we partnered with Frito-Lay to create a DLT that delivers heat, but with a twist, and is available exclusively at Taco Bell. Mirroring the flavors of a regional spicy Doritos chip, we made a few changes based on customer feedback--including the use of a red shell and a more descriptive name--to create Fiery DLT."

Based on social conversation and excitement around the new DLT flavor, Taco Bell is making sure its fans will get the chance to taste it first. To reward them for their passion, Taco Bell is encouraging fans to watch the brand's social media channels now through Aug. 22 for surprise opportunities to try the new taco before it launches nationally.

"The [Taco Bell and Frito-Lay] partnership continues to prove the power of two mega brands working together to create firsts in restaurants and on the grocery aisle," said Chris Brandt, chief marketing officer for Taco Bell.

In recent weeks, conversation around the new name of Taco Bell's latest DLT flavor has been a matter of mystery, with guesses being thrown out by food bloggers and fans. Two weeks ago, the brand mailed out boxes with a variety of Doritos tortilla chips to media and other influencers marked with the hashtag "#_DLT," igniting photos and videos of the mailing with excited guesses of what the next DLT might be.

Fiery DLT will be supported by television, in-store point of purchase (POP) and radio advertising led by Deutsch L.A., as well as digital and social media, supported by Digitas. All media is expected to break Aug. 25.

Doritos tortilla chips is one of the billion-dollar brands that make up Frito-Lay North America, the $13 billion convenient foods business unit of PepsiCo (NYSE: PEP), which is headquartered in Purchase, N.Y.

Taco Bell Corp., a subsidiary of Yum! Brands Inc., Louisville, Ky. is a leading Mexican-inspired quick-service restaurant (QSR). Taco Bell serves made to order and customizable tacos, burritos, and specialties such as the exclusive Doritos Locos Tacos, gourmet inspired Cantina Bell Menu and lower-calorie Fresco Menu. Taco Bell and its more than 350 franchise organizations have nearly 6,000 restaurants across the United States that serve more than 36 million customers every week.