MINNEAPOLIS -- Target Corp. is replacing its traditional foodservice offering in 14 test stores, replacing the hot dogs and nachos with a wider array items, including "artisan-style" pizza, fresh salads with ingredients such as kale and edamame and pressed juices with beet and carrot, according to a USA Today report. 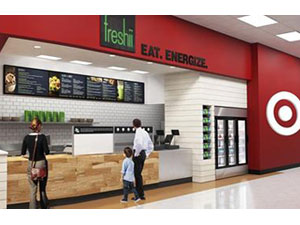 Starting in October, the company will roll out a new cafe concept, said the report. Fast-casual chain Freshii will go into nine stores, while Pizza Hut will open restaurants in three stores featuring a limited menu of "artisan" pies, such as margherita and barbecue chicken. Two Minneapolis stores will get outposts of D'Amico & Sons, a local Italian restaurant whose founders have been semifinalists for a James Beard award multiple times and whose menu includes toppings like organic goat cheese and arugula.

About 1,700 out of Minneapolis-based Target's nearly 1,800 stores have cafes, the report said. In the test markets, the cafes will be replaced with either a Freshii, a D'Amico & Sons, or Pizza Hut.

The test is the first major change to Target's food strategy since hiring new head of grocery, former Safeway executive Anne Dament, in April, but the idea has been underway since shortly after CEO Brian Cornell took the helm last August, Tina Tyler, Target's chief stores officer, told the newspaper.

Cornell has made food a bigger priority for Target, with plans to increase its offering of natural and organic food products and local brands, said the report.

Target decided to go in a new direction with its cafes after hearing from customers who wanted higher-quality food and more of a fast-casual atmosphere, Tyler said. Currently, about 40% of Target customers visit the cafe while shopping. The test is less about boosting that figure and more about showing customers that the brand is serious about health and wellness, she said.

Right now, most stores feature a Target-branded cafe with a menu of "decadent junk food." The test markets will get rid of those options.

"We think this takes us a giant step in the direction of making a much better first impression," Tyler said.

Size Doesn’t Matter to Target. Or Does It?