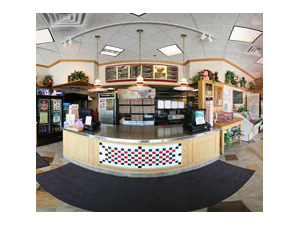 That's the goal for Terry Schmidt, who was hired by the chain in November to lead its recent push for franchising of its small-format Express and medium-format To-Go stores. The Express Unit is designed to be an add-on sales unit. Express Units are small sales outlets for fresh Valentino's food products.

The company has 36 restaurant locations in five states, including the Valentino's Express in a Shell station in Bruning, Neb., the company's prototype. It has another on the way inside a Mobil station in Ceresco, Neb.; it expects the unit to open at the end of the month.

Franchising isn't new to Valentino's, but the recent focus on smaller To-Go and Express locations is new, Schmidt told the newspaper.

The company recently began to focus on the franchising of its smaller operations rather than the large buffets--found in Omaha, Lincoln and several other Nebraska cities--that were the focus of franchising in the past. The latest effort will be focused on the Midwest, particularly Nebraska, Kansas, Missouri and Iowa, he said.

With the newer types of stores, Valentino's joins a push the last few decades to make pizza more of a fast-food option. This push meshes with convenience stores' interest in getting pay-at-the-pump customers to come inside, said the report.

Omaha-based Godfather's Pizza began franchising inside convenience stores in 1986, Kathy Johnson, vice president of franchise services, told the paper. The company now has 21 of these express locations in Nebraska and 445 across the country.

Ankeny, Iowa-based Casey's General Stores Inc. introduced pizza in 1985 to a Waukee, Iowa, store. The company is now the fifth-largest pizza chain in the United States. Casey's has also expanded into pizza delivery and recently announced the testing of a Casey's Pizza Express store with a limited foodservice menu and no convenience store.

All but maybe 100 of its 1,735 stores now make pizza from scratch, Casey's vice president of finance, Brian Johnson, told the paper.

Schmidt said Casey's success as one reason the idea of adding Valentino's might be attractive to convenience store owners.

Kathy Johnson noted that with pay-at-the-pump options for gas, people aren't going inside convenience stores as frequently to buy other items. Pizza pickups bring them in.

"I think more operators will bring food in because it has a healthy [profit] margin," she said.