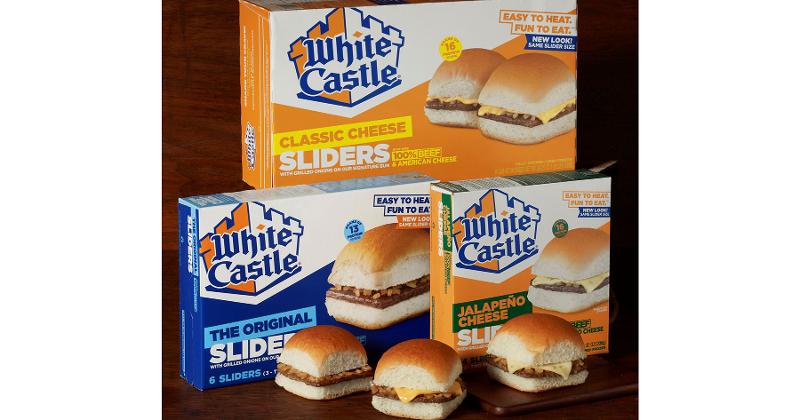 COLUMBUS, Ohio – At 100, White Castle is giving itself a little facelift.

Since October, the nation’s first fast-food hamburger chain, which opened in 1921 in Wichita, Kan., has been rolling out a new design on select retail packages. The design features a modern look, clean lines, bold colors and a dominant image of a single Slider across its portfolio of products. By the end of March, all retail packages will sport the new image.

“This package refresh proclaims ‘tasty,’ and we love the fact that it coincides with our 100th birthday,” said Jamie Richardson, vice president at White Castle. “For a family-owned business spanning four generations, we’re always looking for new ways to respond to our customers’ preferences and satisfy their crave.”

White Castle, which in the last few years has been beefing up its convenience-store offerings, had its customers top of mind in planning the packaging change. In 2019, it began to explore the packaging design elements that matter most to consumers: benefits, brand identity and taste appeal. Working with a food packaging and branding company, White Castle then redesigned the boxes for its frozen Sliders, introducing the tagline, “Easy to heat, fun to eat.”

While White Castle is mainly known as a fast-food restaurant brand, about 25% of the company’s sales are in the retail division, according to Tiffany Carreker, general manager and vice president of sales for the division, which launched in 1987. At the time, White Castle was the first quick-service restaurant (QSR) to offer its menu items for purchase at grocery stores for preparation at home.

“The retail division … had another strong year in 2020,” Carreker said. “In a year of gains for many CPG [consumer packaged goods] brands, our growth outpaced the category by 8%. We’ve seen steady growth year after year, to the point where our retail business today is more than double the size it was in 2010.”

White Castle’s retail product lineup now includes five Slider varieties in a range of package sizes. The Sliders are sold in freezer aisles at grocery, convenience, drug and club stores nationwide.White Castle credits this success, in part, to its commitment to quality. While other restaurant companies entering the retail space have outsourced production, White Castle maintains its own supply chain, from meat processing plants to bakeries and retail manufacturing plants. This means the Sliders in the frozen food aisle are virtually identical to those served in restaurants.

White Castle, based in Columbus, Ohio, owns and operates more than 360 restaurants. In 2014, the Original Slider was named Time Magazine’s most influential burger of all time.

Travel-Ready: Why COVID-Friendly Packaging Is Necessary