CLAREMORE, Okla. -- It's 7:00 p.m. on a Tuesday evening in Claremore, Okla., and Micah Robertson and Stephanie Fox have come to QuikTrip's new store--not to grab a snack, but to grab dinner. The two 20-somethings seem to enjoy taking their time studying the fresh sandwich options from QT Kitchens and a wide-ranging selection on the hot roller grills. 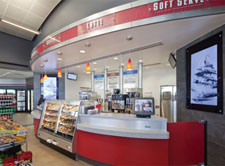 "We really love it," said Fox, who has visited many times since the store opened in mid-March, just 30 miles from QT's Tulsa, Okla., headquarters. "It's not just a gas station or a place to get a drink," Robertson said. "It's more."

The store is unlike any QT they've ever known. Overhead, circular pendant lights cast a warm glow, and an arc of slender red pendants dangle over the registers. The center ceiling is vaulted and covered in perforated brushed metal, enhancing the vastness of the store's 5,700 square feet. And extending from the back wall is a coffee, ice cream and smoothie bar--the store's centerpiece, tended by a QT "barista."

This store, QuikTrip's 600th, is among the first 20 arrivals of the chain's new Generation 3 format. Another 45 stores with the upscale vibe are in the works.

For more on QuikTrip's 600th location, check out the slideshow below, and see the May issue of CSP magazine. For more on Generation 3, see Related Content below.

"The look is obviously very attractive, and it gives you the impression that there is more to these guys than being a convenience store," said QT spokesperson Mike Thornbrugh. "It gives you the idea you can go in and get quality food at competitive prices."

It's clear from the parking lot that the new stores represent a whole new breed of QT.

The store wears a shining face of glass, metal and black tile, with a towering tiered roofline and windows shaded by sturdy red awnings. Metal umbrellas atop round tables create a sidewalk cafe out front. The typical double front door has been split into two single-door entries that straddle a long main register counter inside. Angled alcoves on each side of the store provide four more doors.

In the middle of the bar is an expansive case of fresh pastries and doughnuts. Large digital displays on either side of the coffee bar alternate between a menu and enticing photos of steaming cappuccinos and fruit smoothies. Customers can order from two touch screens, which provide customization and easy upselling.

The rest of the store offers a bounty of food and beverage choices: There's a 24-head soda fountain and a row of frozen drink machines, including 10 churning smoothie dispensers in rainbow colors. Each side of the store has a hot endcap for breakfast sandwiches. Roller grills keep hot dogs, sausages, taquitos and link-shaped cheeseburgers hot, while drawers below warm buns. Two sets of 11-door coolers placed on either side of the coffee bar hold bottled beverages and beer.

Well-lit center displays carry fresh sandwiches and wraps from QT's own commissary, along with salads, fruit cups and take-home items such as full-sized pepperoni pizzas and pastas.

And for customers who like to get their own coffee and tea, there's still a long row of dispensers, with flavor center dispensers for add-ons.

The stores employ 15 to 18 employees, Thornbrugh said, a number that's only slightly higher than QT's smaller stores. (QuikTrip won't say what it costs to run or build a Generation 3 store.)

The stores are intended to compete with specialty coffee shops such as Starbucks, but QuikTrip is also after anyone who caters to fast eaters. Fresh food, including grab-and-go take-home items, will remain a key focus.

QT has good reason to believe that its Generation 3 has a bright future. Just two weeks after opening, Thornbrugh said, the store had already outperformed the company's own carefully gauged expectations.

QuikTrip has approximately 600 stores in 11 states, with nearly 50 more stores under development.

Back to the Future for QuikTrip