CHARLOTTE, N.C. -- With holiday travel over, the typical American household spent about $4,155 filling up in 2011, a record, according to a report from the Associated Press. That is 8.4% of what the median family takes in, the highest share since 1981. 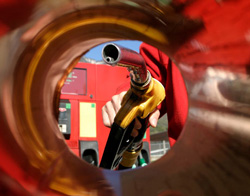 Gasoline averaged more than $3.50 a gallon in 2011, another unfortunate record. And next year isn't likely to bring relief.

In the past, high gas prices in the United States have gone hand-in-hand with economic good times, making them less damaging to family finances. Now prices are high despite slow economic growth and weak demand.

That's because demand for crude oil is rising globally, especially in the developing nations of Asia and Latin America, according to the report. But it puts the squeeze on the United States, where unemployment is high and many people who have jobs aren't getting raises.

The trap has caught Michael Reed of Charlotte, N.C. He hasn't been able to find work since he lost his computer-support job in 2009. Now high gas prices are claiming more of what he has left. He and his wife didn't exchange gifts this Christmas.

"I try to drive as little as possible so it doesn't take such a chunk out of my wallet," he told AP.

In 1981, when the economy was sliding into recession and oil prices were high because of Middle East turmoil, gas ate up 8.8% of the typical family budget, Fred Rozell of the Oil Price Information Service told AP.

For 2011, gasoline averaged about $3.53 per gallon. That's 76 cents more than last year. It's 29 cents per gallon more than 2008, when gas last set an annual record of $3.24. That year, the price of oil hit a record in the summer but collapsed when the financial crisis struck in the fall.

Besides leaving families less money to eat out and go to the movies, high gas prices take a disproportionate toll on consumer confidence. People are more aware of small changes in gas prices because they drive past the signs all the time.

And a buck spent on gas has less bang in the economy than, say, a dollar spent at a restaurant, according to the report. The U.S. is an oil-importing country, so many of the dollars spent on gas ultimately leave the country instead of being invested here in new ventures and jobs.

James Hamilton, an economics professor at the University of California, San Diego, who studies energy prices, estimates that high gasoline prices reduced economic growth by about 0.5% for the year, a substantial hit for an economy only growing at an annual rate of about 2%.

Relief from high gas prices is nowhere in sight, though. Ed Morse, head of commodities research at Citibank, expects oil to average $100 per barrel next year, which would eclipse 2011's average of about $95 per barrel.

Drivers are keeping gas guzzlers in the driveway, combining trips and buying more efficient cars. Compared with the year before, American gas consumption has been down every week for more than nine months, according to MasterCard SpendingPulse, a spending survey.