OAKBROOK TERRACE, Ill. -- As Tesla and Chevy ready their mass-market electric vehicles (EVs), convenience-store retailers are positioning themselves to serve the next wave of EV drivers by installing charging stations. 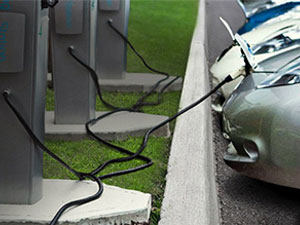 La Crosse, Wis.-based Kwik Trip Inc., which has installed more than two dozen 110-volt outlets (Level 1 charging, providing a full charge in about 22 hours), is dedicated to EV charging and ready for a potential upgrade as the market expands. Kum & Go LC, West Des Moines, Iowa, has tested Level 2 chargers, which provide a full charge in about 8 hours.

Other chains are jumping straight to Level 3 DC Fast Charging stations. While these chargers are considerably more expensive—costing up to $100,000 each, according to EV coalition Plug In America—they provide a mostly full charge in about 30 minutes.

Four of the more notable c-store entrants include: