NEW YORK -- Analysts conducting an exercise in "what if" over the possibility that retail gasoline prices could rise to $5 per gallon believe that Casey's General Stores Inc. and Susser Holdings Corp.'s Stripes convenience store chain could survive and, in fact, benefit from higher fuel prices, while The Pantry Inc. might be at risk. 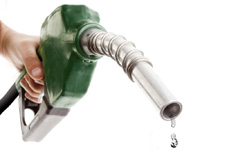 BMO Capital Markets Corp., New York--which recently hosted a roundtable discussion with its economists and analysts to explore the effects of this possible and potentially disruptive scenario--has released the conclusions in a report, "$5 Gas?".

It stressed that this is a "what-if" discussion, and that it is not predicting $5 gasoline, although potential economic recovery and geopolitical stress, combined with the looming seasonal upswing in demand makes $5 gasoline "a real possibility" and warrants a review of investment implications.

Gasoline priced at $5 per gallon would slow the U.S. expansion materially and raise the unemployment rate. A 35% increase in prices would drain $170 billion from annual purchasing power, possibly reducing consumer spending by 1.5% and real gross domestic product (GDP) growth by 100 basis points in both the United States and Canada, it said.

Within food retailing, the sector which includes c-stores, the cumulative effect of $5 gasoline would be "incrementally negative" because of the generally negative impact on the consumer, but some companies will fare better than others. The exact impact on each company would depend on the company's competitive position, geographic exposure, and financial strength.

"We believe materially higher gasoline prices would be incrementally positive for [Ankeni, Iowa-based] Casey's and [Corpus Christi, Texas-based] Susser because--counter-intuitively--while customers may place a cap on the dollars spent on fuel per trip (e.g., a $20 'fill'), traffic actually increases because customers visit the store more frequently for these $20 fills," said BMO food retailing sector analyst Karen Short. "Casey's and Susser's strong prepared food offerings generate industry-leading conversion ratios (percentage of customers visiting the store for gasoline who also make an in-store purchase), and as a result, the higher fuel prices actually benefit both of these retailers by driving stronger traffic inside the store in extremely high margin categories.

"Additionally, both companies are geographically exposed to areas of the country under indexing the national average gasoline price, so while prices are still up year over year (the primary driver of traffic increases), the Midwest and Texas consumer is feeling less constrained by higher gas prices versus consumers in other parts of the country.

"In addition, both retailers are benefiting from the tailwind of extremely strong industries--oil and gas (Susser) and agriculture (Casey).

"Lastly, lower gas margins across the industry would hurt weaker competitors and could accelerate consolidation and attrition throughout the industry, and because Casey's and Susser remain in growth mode, they stand to gain from their competitors' financial challenges."

On the negative side of the equation, Short said, "We see [Cary, N.C.-based] Pantry and [Minneapolis-based] SuperValu as the two most negatively impacted companies in our universe should gasoline prices rise to $5 per gallon. Both companies have credibility issues with consumers as it relates to pricing, and in an environment where consumers feel increasingly pressured, we are not sure that either company has the financial flexibility to remain competitive on pricing and turn around recent traffic losses. Separately, Pantry (vs. Casey's and Susser) has more exposure to vacation destinations."

She added, "Companies that sell fuel would experience lower gas margins (since wholesale prices move more quickly than retail prices) and higher credit-card fees. We believe convenience stores with strong offerings inside the store and that do not rely on fuel margins to sustain the business are best positioned to weather the storm, along with food retailers that have the financial flexibility to remain competitive on pricing and tie their loyalty programs to fuel sales."

Meanwhile, BMO restaurant sector analyst Phillip Juhan said, "We found little to no statistical relationship between changing gas prices and restaurant comps or restaurant stock performance over the last decade (or so). In fact, we found other macroeconomic variables to be more relevant (primarily jobs and income). As a result, we believe that if $5 gas accompanies strengthening economic growth and continued job growth, the rising economic tide would lift all boats, benefiting sales across the restaurant industry. However, if we see gas prices spike despite weakening domestic economic growth (reminiscent of 2008), then we would expect higher gas prices to amplify the negative economic impact to restaurants."

He said, "Higher household spending on gas (in terms of both absolute dollar amount and as a percent of total household spending) would force consumers, particularly in the lower income cohort, to reduce other expenses, including those on food. We believe that private-label food manufacturers, with their well-established appeal to value-conscious consumers, are well positioned to benefit from likely changes in consumer behavior, leading to continued unit and dollar share gains in the U.S. packaged food segment."