SEATTLE -- Another on-demand fuel delivery service has launched, promising to save customers from the need for a gas station fillup, reported The Star-Telegram. 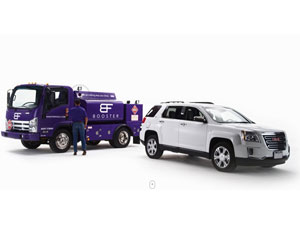 Seattle-based startup Booster Fuels Inc. tells potential clients that they can shorten their employees’ average commutes by 30 to 60 minutes per month, reduce wear and tear on their vehicles by eliminating travel to gas stations and protect them from the “120,000 violent crimes and thefts that occur at gas stations every year.”

The company began testing its service in the parking lots of major employers in the Fort Worth, Texas, area, and in nearby Collin County, the report said. The service has since expanded to Plano, Texas, and the San Francisco Bay area.

Similar to other on-demand fueling services that have launched recently--such as Joule Refuel, FuelMe, Purple and Filld--Booster Fuels lets users order and pay for a fillup of gas via smartphone app.

One customer told the newspaper that he has barely had to visit a gas station in five months even though he drives approximately 200 miles each week. He orders a fillup on a weekly or biweekly basis, using Booster Fuels’ smartphone app to order, pay and indicate the location of his car at the company’s parking lot on a map. Delivery typically takes place in less than an hour.

Booster Fuels’ drivers are hazmat-trained, and in addition to filling up the car, will even check tires and clean windshields. The company claims to price competitively with local gas stations because it buys wholesale, and it offers regular and premium grade gas.

Its purple fuel trucks are modeled after those that refuel planes at airports, said the report, and in fact are outfitted by a firm that builds aircraft refueling vehicles for the military. Each can carry 800 gallons of regular and 400 gallons of premium grade gasoline, and reportedly can fill up a vehicle in only three minutes.

Booster Fuels’ customer base is currently limited to corporate clients or property managers that already have an arrangement with the company. It is offering the service for free to employers for now.

John Parker, head of operations and growth at Booster Fuels, told the Star-Telegram that the company is planning to expand into other U.S. cities. It is also considering adding electric vehicle charging to its services.

“I have yet to meet someone that says, ‘I love going to the gas station,'” Mycroft told GeekWire. “This industry hasn’t changed much in a long time. Our goal is to provide a more cost-effective and energy-effective way to get this chore done that doesn’t involve you having to go to the gas station yourself.”

Another Name in On-Demand Fuel Delivery