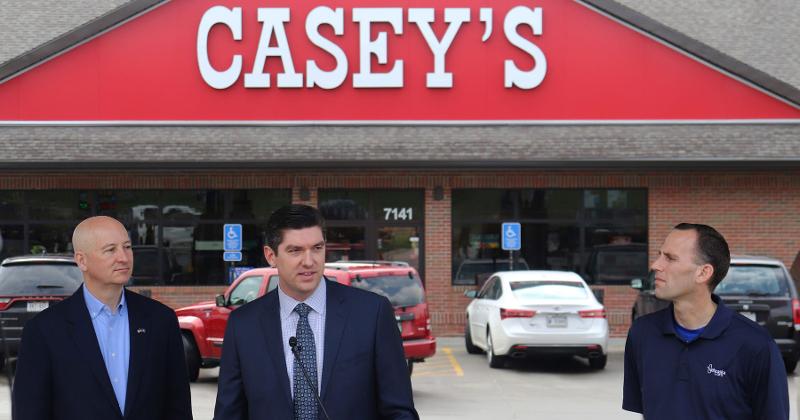 Photograph courtesy of Nebraska Corn Board

ANKENY, Iowa — Casey’s General Stores Inc. is adding E15 to a dozen sites in Nebraska as its wider rollout of the 15% ethanol blend continues.

The retailer received a grant through the Nebraska Corn Board’s (NCB's) blender pump incentive infrastructure program to upgrade to blender pumps at 12 locations in the state to dispense E15, which Casey’s markets as Unleaded88. They include nine sites in Omaha, as well as locations in La Vista, Papillion and Norfolk, Neb. Casey’s also offers E85, the 85% ethanol blend, at its stores in Ogallala and Cozad, Neb.

“We’re offering Unleaded88 at more stores because our guests want it,” said Jake Comer, fuel pricing manager for Casey’s. “The benefits of a lower price and higher octane are hard to argue with.” Comer was a presenter at a May 2019 promotional event with Nebraska Gov. Pete Ricketts and Kelly Brunkhorst, executive director of the NCB, at Casey’s Bennington site, one of the first in Nebraska to add higher ethanol blends.

The chain began testing E15 in 2017, and in 2018 it announced plans to add it to possibly more than 500 locations in partnership with Growth Energy and the Prime the Pump program.

In June 2019, after the U.S. Environmental Protection Agency (EPA) announced its final rulemaking that provides E15 with a waiver of summertime Reid vapor pressure (RVP) regulations, Casey’s announced plans to ramp up its rollout to 60 sites that summer.

Eight other fueling sites in Nebraska received grants from the NCB to install blender pumps during their current fiscal year. To be considered for a grant to upgrade to blender pumps, Nebraska fuel retailers can fill out an application by emailing NCB.info@nebraska.gov.

Ankeny, Iowa-based Casey's General Stores operates more than 2,100 convenience stores in 16 states. It is No. 4 in CSP’s 2019 Top 202 ranking of c-store chains by number of retail outlets, and it is the fifth-largest pizza chain in the United States.

Casey’s to Add E15 to Hundreds of Sites