DULUTH, Minn. -- Three Midwestern convenience store chains are adding compressed natural gas (CNG) to their fuel offering, including one that is new to the business. 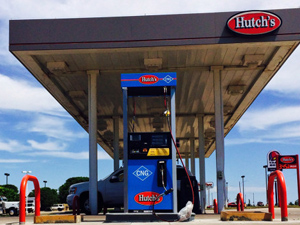 In Minnesota, Holiday Stationstores is partnering with CNG station developer Trillium CNG to build its first fast-fill CNG fueling site, at its First Street location in Duluth. The site will serve new CNG-fueled trucks that Holiday has added to its own fuel delivery fleet. Trillium CNG, which has 20 years' experience and a national network of CNG locations, will build, operate and maintain Holiday's CNG fueling location. In that market, the price of CNG is currently ranging between $1.99 and $2.09 per gasoline gallon equivalent (GGE).

"We recognize the need to offer customers a cleaner, more cost-effective fuel alternative and are pleased to partner with Trillium CNG on the opening," said Brian Ochocki, vice president for Holiday Stationstores, Bloomington, Minn. The 492-store chain has locations in 10 northern states.

The public-access station will offer easy access for heavy-duty fleet trucks, and a dual-hose dispenser so that two semitrailers can fuel up simultaneously. The setup will also include Trillium CNG's proprietary fast-fill hydraulic intensifier compressor. The site is slated to be open in mid-September.

In Kansas, Hutchinson Oil Co. has added its first CNG site in the state at its Hutch's convenience store site in Liberal. According to a report in NGT News, the eight-store chain, which already has three CNG locations in Oklahoma, partnered with Sparq Natural Gas LLC, a developer of CNG fueling locations, and Black Hills Energy, the local natural gas utility, to open the Kansas site.

For the Liberal location, Sparq helped establish its CNG client base, coordinated meetings with the local Chamber of Commerce and officials, and worked with the local fire marshal. Hutchinson Oil, based in Elk City, Okla., oversaw the actual construction of the fueling infrastructure.

Meanwhile, Kwik Trip Inc., La Crosse, Wis., plans to offer CNG at a new convenience store site in Superior, Wis. ABC radio affiliate KDIO reported that the 400-store chain recently hosted an educational seminar for potential customers in the area. Jeff Reichling, territory manager, highlighted CNG's three biggest selling points: "The first being that it's a domestic fuel, it's produced here in the United States; the second being that it's better for the environment than your traditional petroleum products; the third being its extreme cost savings for these companies."