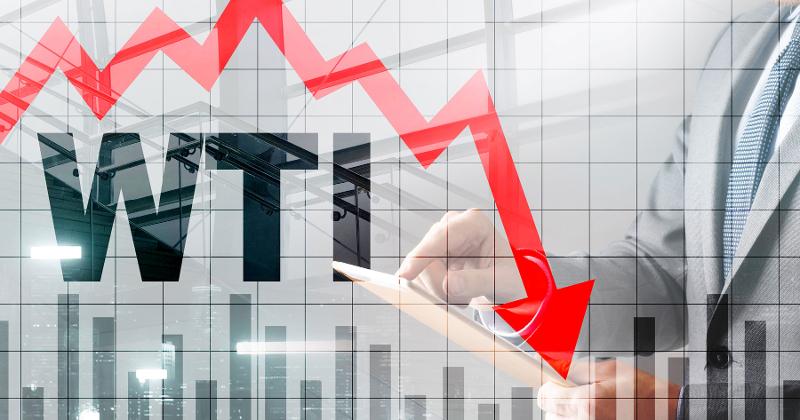 CHICAGO — The never-before-seen drop of crude-oil futures into negative territory this week is expanding upon what has been an “unprecedented” couple of months for fuel markets.

The May futures contract for West Texas Intermediate (WTI), the U.S. crude benchmark, settled at -$37.63 per barrel on April 20 after a 305% single-day drop, marking the first time in history that WTI crude futures have breached negative territory, Reuters reported. Massive demand destruction from social distancing and shelter-in-place orders—global consumption is off about 30% from early March—has pushed excess supply into storage. But that storage is quickly filing up; the main U.S. storage hub in Cushing, Okla., was about 70% full as of last week, and it is expected to be completely full within two weeks.

The May WTI futures contract was set to expire April 22. When that happens, a holder must take possession of 1,000 barrels of oil for each contract it owns at Cushing. With storage filling up, many traders were forced to offload at any price.

According to Bloomberg, crude levels at Cushing have risen 48% since the end of February to nearly 55 million barrels. The hub has a working storage capacity of about 76 million barrels.

“The May crude oil contract is going out not with a whimper but a primal scream,” said Daniel Yergin, vice chairman of IHS Markit Ltd., in an interview with Bloomberg.

“Yesterday was a culmination of the market not being able to absorb excess oil,” Steve Craig, chief energy analyst for Elliott Wave International, Gainesville, Ga., told CSP Daily News in an April 21 interview. “Today is the last trading day for the May crude oil futures contract and yesterday there was something like 115,000 contracts that were left to be closed out. Today there was something like 108,000 left to be closed out. A lot of those contracts—I would venture to guess the majority—are owned by commercial interests that had already planned on taking delivery, and they have the storage capacity available, so it’s not an issue for them. The issue is with those who don’t have storage capacity: They were forced to liquidate their positions and do so at virtually any price, so they wouldn’t be forced to take delivery.”

“I have seen the occasional Rocky Mountain [region] negative posting for crude, but to see WTI for Cushing delivery at such steep negative numbers is unprecedented,” he told CSP Daily News. “It should be an anomaly, but it speaks to the lack of available storage: Not that storage is full, but it is leased by companies with very strong hands.”

Craig describes the current storage dynamic as a “long squeeze” on the market.

“The long players had no capacity to store oil by taking delivery, so they were forced to sell their contracts, and they had to force it down to a price where somebody would take it off their hands,” he said.

The June futures contract, meanwhile, is also trending downward, falling more than 40% to $11.79 per barrel, although it rallied slightly, Bloomberg reported.

“From our perspective, we’re still bearish and will maintain a bearish attitude until the pattern looks complete or something tells us we’re not looking at the market correctly,” Craig said. “Right now we’re focused on the June contract. It may sell off low today, and there’s no reason to think we have a bottom in place.”

“I don't think the storage situation will improve, so expect the problem to at least somewhat transfer over into the June contract,” he told CSP Daily News. “What it means for retailers: more breathing room and margin, and not sure how much of it will be passed on to retail prices. … For motorists, they may not see the full impact simply because it appears retailers are holding onto whatever margin they can, given the uncertainty.”

Meanwhile, President Trump has promised aid to support the U.S. oil industry. On April 21, Trump tweeted, "We will never let the great U.S. Oil & Gas Industry down. I have instructed the Secretary of Energy and Secretary of the Treasury to formulate a plan which will make funds available so that these very important companies and jobs will be secured long into the future!"

While details are still unknown, what effect such a move would have on prices is uncertain. An April deal between the Organization of the Petroleum Exporting Countries (OPEC) and their allies to cut back production to help stave off further price declines has had limited effect. The price for Brent, the global crude benchmark, fell more than 20% on April 21 to its lowest point in 18 years, according to The Guardian.

Fuel Markets in the Time of COVID-19