LOS ANGELES and SAN FRANCISCO -- About a half dozen on-demand fueling apps have popped up across the United States over the past year, promising a fill-up when and where you want it. All of them—Filld, JouleRefuel, Booster Fuels, Purple, Yoshi and WeFuel—offer drivers a way to skip the local gas station and save some time in their day. But local fire authorities, scrambling to catch up with this new service model, are warning that they are not up to code. 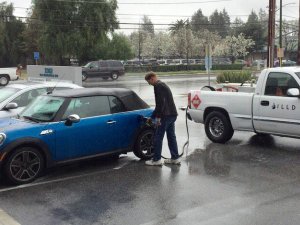 Most of the services operate via an Uber model, where a customer orders a fuel-up via an app, providing the position of their vehicle and a preferred fill-up time. The service provider then sends out a driver with a truck—either outfitted with fuel storage tanks or carrying gas storage containers—to fill up the vehicle.

But according to Bloomberg, fire departments in cities such as Los Angeles and the San Francisco Bay Area, where many of the on-demand fueling services are operating, are cautioning that these fuel delivery vehicles, which often carry hundreds of gallons of fuel, do not meet code.

“It is not permitted,” Lt. Jonathan Baxter, spokesman for the San Francisco Fire Department, told Bloomberg. He added that San Francisco residents should call the fire department if they see these services fueling up vehicles in the city.

“We have to look at the safety of everyone,” said Baxter. “You could imagine what could happen if a fueling truck went into a parking garage under a commercial or residential building. It would not be a good outcome.”

The co-founder of one service with operations in San Francisco—Yoshi—was initially surprised by the news. “We haven't talked to them,” said Nick Alexander. “I don't know about that. It’s news to me.” In a follow-up, Alexander told Bloomberg he believes that Yoshi’s service is legal and that it limits the size of its gas tanks to keep them within guidelines of the International Fire Code.

Filld, which began serving the Silicon Valley 18 months ago, is beginning service in San Francisco this week with three delivery trucks. CEO Chris Aubuchon said, “You can never ask for permission because no one will give it.”

The fire code in Los Angeles also does not currently allow gasoline delivery, although the fire department is drafting a code to cover the services. “It’s just one of these things that nobody has really thought about before—kind of like how Uber popped up out of nowhere,” said spokesman Capt. Daniel Curry. Until there is a code, however, the services are not allowed in the city, he said.

Bruno Uzzan, the CEO of Purple, a fuel delivery service based in Los Angeles, said while the company was in talks with the fire department, it did not plan to stop delivering gas. “The way we currently operate is permitted by the code,” said Uzzan.

Booster Fuels, which operates in the San Francisco Bay Area, is taking a more cautious approach. It has suspended fuel deliveries in that market after the Santa Clara Fire Department made the request as it reviews Booster Fuels’ permit application. The Santa Clara city manager is putting together a report on fuel delivery services for the city council to review. County fire officials also asked Filld to stop operations, but the service has chosen to keep delivering fuel.

“We basically said, ‘We strive to be safe in every way to the consumer, and this is exactly what we do, and we welcome dialog,’ ” Aubuchon said. “If it was illegal, they would have and should have told us many months ago.”

He said that Filld’s trucks are safer than the large-tank fuel-delivery trucks that service businesses such as construction companies.

“Those larger tanks, while they carry that many gallons for efficiency, if there is a turnover or an accident of one of those, it really is like a big bang; you have problems when any one of those has an accident,” Aubuchon said. “The size of our tanks is much, much smaller, and we have multiple of them. So for us to have a spill of their caliber, we’d have to have a hundred trucks in a row.”

The services also deal with regulatory issues beyond the fire code. Local weights and measures must certify that their gas meters are calibrated, to ensure that customers are being charged correctly. The Santa Clara County Department of Weights and Measures has approved meters for Yoshi, Filld, WeFuel and Booster, but does not check the truck’s fuel tanks. “We don't know who they fall in, regulation-wise,” said Stan Toy, deputy sealer at the department.

Meanwhile, the state agency that oversees California’s fire marshals office has a meeting slated for May 24 to talk about the mobile fueling services. Spokeswoman Lynne Tomachoff told Bloomberg that the agency does not feel the current operations “meet the requirements to be able to operate safely.”