CAMARILLO, Calif. -- During the past three weeks, the U.S. average regular-grade gasoline price at the pump dropped 26.54 cents per gallon to $2.4419. Over 13 weeks, it has receded a whopping 42.43 cents per gallon, and it stands at a $1.0212 discount to its year-ago point, according to the most recent Lundberg Survey of approximately 2,500 U.S. gas stations. 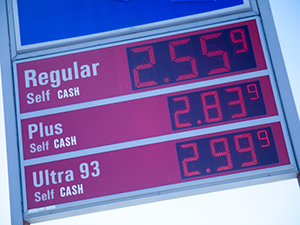 This time it was not crude oil prices that brought the cut. In fact, both main light crude index prices strengthened some during the period. It was the downstream sector, both refiners and retailers, slashing their own gasoline margins for sake of chasing motorist purchases.

Both refiner and retailer margins on gasoline have been enjoying a heyday, and even after these cuts, margins are still impressive.

Consumers are in a heyday of their own, demanding far more gasoline than last year, thanks in large part to lower prices.

Gasoline supply is more than enough to accommodate demand. Although the capacity use rate dropped due to some refiners initiating winter maintenance projects, stocks grew some.

The U.S. gasoline market is hot and competitors are busy maximizing opportunities for sales gains.

Correction of supply tightness during hobbling of some plants has been dramatic in the Midwest and West. For example, Indianapolis pump prices crashed nearly 73 cents per gallon during three weeks to just $2.13 and the Chicago average plummeted nearly 62 cents to just over $2.85 as the return of BP's Whiting refinery brought huge supply relief to the region. The Los Angeles average dropped nearly 36 cents over three weeks to just under $3.31, with San Diego's falling nearly as much, mostly because higher California prices have been beckoning supply from outside after several months of shortage.

Absent a sudden and large jump in oil prices, retail gasoline prices may well drop another dime or more near term. Margins on average are still healthy enough to withstand some shrinkage, and this week brings some cost relief to refiners as much of the country is allowed to down shift vapor pressure for winter grade gasoline. Higher vapor pressure caps are also positive for gasoline output.

Retail gasoline margin on regular is just over 30 cents per gallon, and year to date it is more than 18 cents, beating its calendar 2014 average by a nose. Year to date, the regular grade pump price is a wide 80 cents per gallon under that of calendar year 2014.