AUBURN, Calif. -- As an antidote to fluctuating energy prices and squeezed profit margins, Walt Dwelle and some other independent gas station owners are trying their luck in the world of commodities futures, according to a Wall Street Journal report. 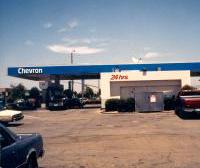 They hope to find trading strategies that will stabilize costs and shore up profits. A misstep in this new world can be ruinous, but some of these nervous rookies are succeeding, the report said.

Last winter, Dwelle and his three brothers locked in bargain prices for 25% of their gasoline, a move that saved more than $1 million. [image-nocss] In March, they correctly bet that runaway oil prices were about to peak. Currently, they are hedged against a further price leap. Overall, futures trading has helped their bottom line in 10 of the past 13 months, said the report.

Tiptoeing into the commodities market feels spooky at first, Dwelle told the newspaper. Profit-and-loss swings can be huge and unexpected.

Refiners generally price unbranded fuel about 2% or 3% below their house brands, the report said, which offer greater prestige and fancier additives. That gap lets independents position themselves as cheaper, no-frills alternatives, it said. Most of the time, wholesale prices adjusted uniformly when oil prices rose or fell. So station operators passed along costs to the public. Motorists might complain, but even major swings in energy prices hardly altered the competitive balance among stations.

In the past 18 months, two things have changed, according to the Journal. First, changes in world oil prices have station owners timing fuel purchases to the hour, so they can buy more at the troughs and less at the peaks. This year has seen wholesale gasoline prices gyrate as much as 10 cents a gallon within a day. In such times, a station owner's most crucial decision may be whether to refuel tanks at Tuesday afternoon's prices or hold out for cheaper terms the next morning.

Second, unbranded gasoline is no longer the automatically cheaper alternative to branded products. Sometimes that is because refineries have adjusted their price lists, helping stations with their brand get cheaper fuel. In other cases, refinery shortages or heavy betting by speculators are raising prices in the unbranded market, to a degree that no one expected.

For independent stations, which rely on cheaper unbranded fuel to be competitive, these are tough times, Mary Welge, an analyst at Oil Price Information Service, told the paper They got used to one kind of market dynamics for generations. Now they're getting killed.

Family members say that the Dwelles closely held Nella Oil Co. has annual revenue of about $700 million and net income of at least $10 million in its good years. Nella owns 23 stations under its Flyers and Olympian brands. It also manages 27 stations for ExxonMobil and other majors. And it does some fuel wholesaling and truck refueling, all in central and northern California.

Nella did not focus much on its fuel-buying habits, instead focusing on other areas, such as signage, cleanliness and snacks. The Dwelles bought gasoline almost daily at whatever terms the market set, deferring to suppliers who did not want to be locked into guaranteed prices months in advance.

This passive approach came under fire. We realized we did well when fuel prices were falling, brother Steve Dwelle said. Cost savings could be passed along slowly to the public, allowing profit margins to fatten. But when refinery prices soared, pump prices could not keep pace and Nella's margins were squeezed. We wanted a defense mechanism to guard against the market's razor scratches, he told the paper.

The Dwelles hired a fuel trader, but his trading was too rapid-fire and unprofitable for their tastes, they said. The brothers regrouped and decided to rely instead on someone who knew their way of doing things"Dolores Santos, a former cashier who had risen to become Nella's manager of supply and distribution. Starting in Spring 2004, Santos began buying gasoline futures on the New York Mercantile Exchange (NYMEX), in batches of 30 contracts a month. Each futures contract, an agreement to buy a certain amount at a given price by a given time, covered 42,000 gallons of 87-octane unleaded fuel, about one-quarter the amount that Nella's outlets typically sold in a day. Nella in effect was locking in future gasoline purchases at preset prices, hoping that these would prove to be bargains.

Santos also negotiated some complex swaps with energy traders that amounted to bets on the future price of California's unique blend of low-emissions gasoline, the report said. If gasoline prices rose, the futures and swaps would become more valuable. If gasoline prices fell, the contracts would be loss-makers, but they would be offset by strong profits from Nella's regular operations.At first, everything went right, said the Journal. Nella's early futures contracts locked in wholesale prices of about $1.30 a gallon. (Those contracts do not include as much as 50 cents a gallon of at-the-pump taxes.) As energy prices rose in mid-2004, it become clear that Nella's contracts were at below-market rates. Rather than hold those contracts until their expiration date and take delivery of fuel through NYMEX, Nella cashed out a week or two early at a profit and used the winnings to help pay for gasoline from its regular suppliers.

Later in 2004, oil prices slumped, crushing Nella's futures positions. For reassurance, Santos talked every few hours with Chris Mennis, a commodities broker who is a veteran of the energy markets. His firm, New Wave Energy, became Nella's broker on all futures trades.

Mennis said he urged Santos not to make reckless trades when energy prices were not going her way. Keep whittling down futures positions gradually, day by day, he advised. Do not dump Nella's entire holdings in a single spasm. Are you trading to reduce your risks, or are you doing this to speculate? he repeatedly asked. Only speculators would dream of scoring big by outwitting the market's day-to-day meanderings, he explained. A gradual approach might not catch every last cent of possible profit. But it would guard against playing costly, mistaken hunches.

Walt Dwelle said he grew mesmerized by oil news bulletins and price updates on his computer. It was like a videogame, he told the paper.

In October 2004, a barrel of crude cost $55. Two months later, it sunk to $41, on the belief that a mild U.S. winter would reduce heating-oil demand. Then it surged to $48 in January and $58 in early April, propelled by strong demand from China and Wall Street predictions of even-higher prices.

The price moves took a toll, the report said. As gasoline prices shot past $2 a gallon, customers at Nella's stations largely stopped buying 91-octane premium fuel. Even BMWs and Corvettes made do with cheaper 87-octane gasoline. That switch cost Nella some of its highest-margin pump traffic. Meanwhile, refinery outages in California caused the price of unbranded gasoline to soar. With more customers than they could satisfy, refineries offered their best deals to stations selling their own brands and jacked up wholesale prices for everyone else. That put Nella's Flyers and Olympian stations at a severe disadvantage. Because they were paying more for fuel, they either had to pass along the costs to customers and lose much of their traffic or stay cheap at the pump and watch their profit margins vanish.

In early 2005, some unbranded stations in California closed their pumps for several weeks, said the report. With wholesale unbranded gasoline costing as much as 15 cents a gallon more than branded, these stations did not see any way to attract pump customers without selling at ruinous losses.

Nella wanted to hang on. Walt Dwelle asked a top refinery executive if he could temporarily give Nella a price break on unbranded gasoline. In return, he offered the official higher prices later, when they would be easier for Nella to stomach. The request was futile. He was perfectly cordial, Dwelle said. But his bottom line was: That's the way that markets work. And we respect the market.

Fortunately for Nella, in first-quarter 2005, Santos trading brought $1.5 million of gains. It was not enough to offset Nella's losses at the pump. But it made the quarter far more tolerable, the report said.

In mid-March 2005, Nella executives and advisers huddled to talk about whether oil prices could possibly keep climbing much beyond $50 a barrel. Several people said yes. But Walt Dwelle argued that a price bubble was about to pop. He decided that Nella should sell all its futures contracts right away, months ahead of schedule, on the belief that the company could lock in extra profits that way.

Walt Dwelle's move paid off in the short-term, as crude-oil prices in April slipped below $50, said the report. But Mennis worried that without hedging in place, Nella could be vulnerable to another jump in energy prices. He persuaded the Dwelle brothers to embark on a different trading strategy. That approach involved purchasing options, which grant the right but not the obligation to purchase something at a set price on a future date"in this case vast amounts of gasoline over the summer at $1.95 a gallon. If prices stayed below that level, the options would expire worthless. But if gasoline prices soared, the options would let Nella get supplies at below-market prices.

Now, Ken Dwelle, son of Tom Dwelle, is spending several months as an apprentice to Santos, learning the futures trading business. I jumped at the opportunity to do this, Ken Dwelle said. I can't think of anything more important to our future.