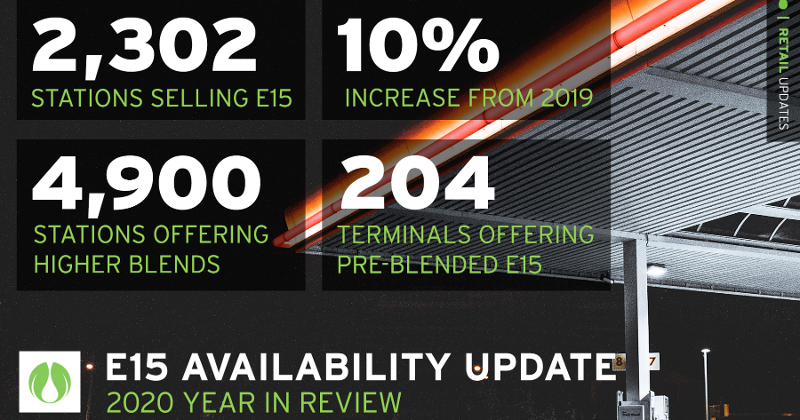 Despite a year that most in the fuel market would sooner forget, not all fuels took a hit. Fuel customer conversion is at its highest since the pandemic began; according to Technomic’s Q1 2021 C-Store Consumer Marketbrief, 51% of consumers who purchase fuel on the forecourt also enter the c-store. This means that drawing customers to the pump is more crucial than ever, especially as more and more customers shop c-store retail or foodservice as they fuel up.

In fact, over 2,300 retailers know which fuels are rising above the circumstances to maintain—or even improve—sales. High-ethanol biofuel E15, known as Unleaded 88, was—and is—one exception to the struggling fuel market. The higher-ethanol blend still saw a 10% increase in retail adoption over 2019, and as vaccinated motorists are hitting the road once again, retailers are more excited than ever to offer a fuel that provides them with an economic and competitive advantage over others.

E15 expansion by the numbers

In 2020 alone, the number of retail sites offering E15 grew 10%, making the fuel available at over 2,300 stations in 30 states, according to Growth Energy. In addition, Americans drove more than 6 billion miles on E15 over the course of the year, bringing the total miles driven on E15 to over 20 billion.

How is it that E15 has continued to increase sales and expand availability amid an otherwise difficult market? According to Growth Energy, a number of factors have continued to bolster E15 expansion.

First, E15 boasts a host of loyal consumers—who will even decide which convenience store to visit based on whether or not it offers the fuel. Growth Energy cites a collection of over 4,000 consumer surveys, on-location interviews, GasBuddy research and trials at more than 350 retail locations, which show that consumers who are aware that E15 is a fuel option are likely to select a retailer that offers it.

Major retailers have taken notice: in Growth Energy’s “The E15 Expressway: Web Chats with Retailers” series, retailers including Casey’s, Thorntons and Family Express said they’ve seen E15 become increasingly popular over the years and that it gives them a competitive advantage on the market.

Importantly, pivoting to offer E15 isn’t a difficult transition for a retailer to make. E15 is compatible with most preexisting equipment, making adding the option quick and affordable. Retailers can also easily swap out E10 or mid-grade fuel blends for E15, which makes installation a breeze.

As more retailers make the switch to E15 and more consumers seek it out at the pump, offering the fuel becomes a greater and greater necessity to maintaining a competitive edge amid an already difficult market.

Fortunately, pivoting to offer E15 is generally an easy, inexpensive transition. And with advice from the experts at E15—for everything from assessing on-site infrastructure for compatibility to marketing the fuel—it’s even easier. To learn more, visit Growth Energy’s Retailer Hub.