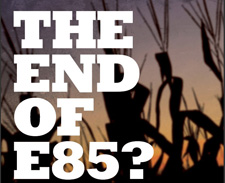 With the expiration of the Volumetric Ethanol Excise Tax Credit (VEETC) at the end of 2011, retailers selling ethanol blends faced an immediate price increase. For those selling E85, the impact was potentially more dramatic, considering that VEETC granted a 38.5-cent credit per gallon, enabling the biofuel to be priced more competitively with regular unleaded. Indeed, according to E85prices.com, the average nationwide spread between E85 and regular unleaded is currently 7.8%.

At the same time, ethanol prices have fallen over the past few months thanks to oversupply. In a forecast, the E85prices.com site notes that with ethanol trading at the Chicago Board of Trade for 70 cents per gallon less than gasoline, the average for February 2012 should be at 15%. For E85 retailers, it's important to hit the right spread: A poll of more than 700 flex-fuel vehicle (FFV) drivers by the same site found that more than 80% would buy the high ethanol blend only when it was priced at least 15% lower.

"My outlook for the E85 business is I think we will keep enough of a spread between ethanol and gas to keep the market moving," said Todd Garner, CEO of Protec Fuel, Boca Raton, Fla, a distributor and fuel risk-management firm that assists retailers in the Southeast and East Coast with installation of E85 equipment. "My concern: We've built all these stations over the last couple of years--I think the spread will be great enough to keep an existing E85 business moving. I just don't know if it's going to grow."

"For the retailer, it will come down to what's my per gallon cost, what's my per gallon opportunity," said John Eichberger, vice president of government relations with NACS. "[If] I'm going to be taking a bath on E85, I might as well switch it to something I can make some money on."

Of course, the E85 market is still in its infancy, with only 2,400 fueling sites in the United States. And, the notoriously price-sensitive FFV driver has the ability to fuel up with any blend of ethanol.

"We're not going to conquer the world with those folks," said Ed Burke, president of Dennis K. Burke Inc., a distributor of gasoline, diesel and heating oil based in Chelsea, Mass. Burke, informally declared "The Godfather of Biodiesel" for his enthusiasm for the biofuel, began selling E85 at his one c-store in 2006. He describes his efforts at installing compatible equipment and meeting local fire regulations "a two-year saga" that eventually cost $90,000.

Even though he is a biofuels enthusiast, Burke is realistic about how long E85 will make sense for his business without some type of pricing support.

"Unless ethanol stays a lot cheaper than RBOB, one would think E85 prices would really get killed," he says. "For growth, you need a 25% difference in pricing. If you get into the government bureaucratic world, it may grow on its own."

In fact, today, Burke sells 1,000 to 2,000 gallons per week, mainly to local government agencies. Some customers fill half the tank with E10 and half with E85 to get a higher-mileage blend. If the price spread stays thin, he may replace the E85 eventually with racing fuel.

However, for many E85 retailers, offering the fuel is not so much about the profits as it is about the differentiation—and alternative—it offers customers. An FFV enthusiast and former E85 retailer, Phillip Younger knows his way around the biofuel. His advice for retailers who plan to stick it out with E85 in 2012: Buy direct from an ethanol producer, or connect with a jobber who really understands the business. Younger managed an unattended E85 station, now owned by Renew E85 LLC, in Oshkosh, Wis., from 2004 to 2011.

"Would you buy new a Chevy from Ford?" he asked. "How would Ford choose to price that Chevy if they didn't make it? That's the core issue. There's going to be 30 cents added at the terminal--and that does no value to the retailer struggling to make a margin on it, or the customer who will choose to buy it."

It's not easy, he conceded. Not every ethanol producer has that ability or desire to sell direct, either not having blending capability at the plant or being wary of the credit risk. But it is worth the effort.

In terms of pricing, Younger's rule of thumb is to try to keep E85 at 80% of the gas price; if you can't, keep questioning your supplier about why they cannot buy better. "There will be times it will be 70% of gas price," he noted. "Sometimes you won't get better than 85%. But it should never be around the gas price at all."

Finally, Younger advised putting in 12,000-gallon tanks rather than the larger 30,000-gallon tanks so the retailer does not need to worry about buying a partial load. He also advised installing blender pumps so if you cannot locate an ethanol producer with blending capability, you can do it on your own site, and will have a wider choice of suppliers. FFV drivers will also have a wider selection of fuels. Today, about 200 of the 2,500 E85 fueling sites feature blender pumps.

"Since there are a lot of FFVs on the road, if you don't want to use E85 to drop range but like supporting farmers, you get same mileage--just throw in E30."

[Read more about the future of E85 and the implications of no national energy policy in the February issue of CSP magazine, or click here.]