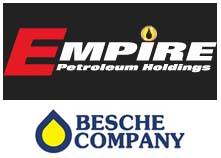 The addition of Besche Oil increases Empire's market presence in its home state of Maryland, and continues to increase its business partnership with Sunoco and CITGO.

The company most recently acquired the fuel distribution assets of Woodfin Heating Inc., Richmond, Va., and Eagle Fuels LLC, Tulsa, Okla., in October 2012 and is in the process of completing additional acquisitions over the coming months, it said. In April 2012, Empire Petroleum acquired the assets of American Energy Distribution LP, a Dallas-based distributor that supplies branded and unbranded fuel to gas stations throughout Texas.

"The Besche Oil acquisition illustrates Empire's continued ability to exercise on our growth plans, especially in our local market" said Empire's president and chief executive officer, Eli Kimel. "We have been very familiar with the Besche assets for many years, and we believe that these assets and their operational strategies will fit in well with our goals in this region."

In order to make the transition as seamless as possible for Besche Oil's operators, Empire has hired Besche Oil's vice president of motor fuels, Paul Colonna, who will continue to serve the Besche Oil accounts as a representative for Empire.

"My family has spent decades building our business," said Mike Besche, owner of Besche Oil. "However, when I decided it was time to exit the industry, Empire seemed to be the best suitor to purchase the company"

Besche Oil is a fuel distributor servicing accounts in the states of Maryland and Delaware.