WASHINGTON -- While a broad range of factors influence the price of gasoline, worldwide crude oil prices continue to be the main driver of what Americans pay at the pump, concluded a report issued by the Federal Trade Commission (FTC) Bureau of Economics. The report examines trends in the petroleum industry and how they have affected gasoline prices between 2005 and early 2011. 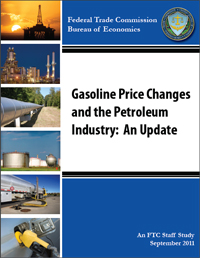 "This report is part of our ongoing focus on competition in energy markets. The American people need to understand why they often pay so much for gasoline," FTC chairman Jon Leibowitz said.

"Our report spells out the factors that determine what consumers pay at the pump, and why gas prices seem to 'rocket up' but 'feather down.' In addition to the price of crude oil, by far and away the largest factor in gasoline prices, the report looks at factors such as how fast retail gas prices adjust to changes in wholesale gas and crude oil prices; refinery profit margins; and the possible impact of futures speculation."

The new staff report builds on previous FTC staff reports to inform the public and policymakers about petroleum industry issues in general, and gasoline prices in particular. It updates parts of a 2005 FTC report on gasoline price factors, and parts of a 2004 report that examined mergers, structural change and antitrust enforcement in the petroleum industry. The new report also summarizes and comments on new learning from academic and other researchers on pertinent topics.

In addition to examining the factors that affect gasoline prices, the report focuses on changes in gasoline prices over time. Specifically, it looks at whether prices increase faster when costs go up, but fall more slowly when costs go down--a phenomenon known as "rockets and feathers." The report also examines another phenomenon known as "price cycling"--unusual gas price change patterns seen in certain geographic areas.

Since 2005, crude oil prices have changed due to shifts in both world-wide supply and demand. Although demand fell during the recent global recession, overall consumption increased by almost 7% between 2004 and 2010, putting upward pressure on crude oil prices. During that time, crude oil demand from North America, Europe, Korea, and Japan fell. In contrast, crude oil demand increased in many developing countries, including China, where consumption grew by 46%.

World oil production increased over the years, with additional supply somewhat moderating the upward pressure on prices. Currently, more than 70% of the world's proven oil reserves are in OPEC member countries. Because OPEC's production increased at a slower rate than that of non-OPEC countries between 1974 and 2010, its share of global production has fallen from 54 to 42%, despite its significant reserves. OPEC tries to maintain the price of oil by limiting output and assigning quotas. While OPEC has some ability to affect crude prices, its effectiveness as a cartel is limited. The largest increases in non-OPEC crude supply have come from the United States, Russia, Canada, and Azerbaijan.

Factors other than crude oil prices have played a significant role in gasoline price changes since 2005. These include the loss of refinery capacity and disruptions of major pipelines due to Hurricanes Rita and Katrina in 2005, which led to large gasoline price spikes nationwide. Gasoline prices also increased significantly relative to crude prices in mid-2006 and mid-2007, due to several factors including increased demand, higher ethanol prices, reduced refining capabilities, and the lingering effects of the 2005 hurricanes. Prices fell during the 2008 recession, and generally remained low, relative to crude prices, between 2008 and fall of 2010.

There have been only minor changes in the petroleum and refining market structure since 2005. While there has been a small decrease in the number of U.S. refineries, overall refining capacity has increased by 3.6%. Refiners now appear to be less integrated into gasoline retailing, as several large refiners have sold parts of their retail operations.

The FTC has been investigating petroleum-related antitrust matters for 35 years. The agency has held public hearings, and has done extensive reports and economic studies on the industry. Since 2002, the FTC's staff has monitored weekly average retail gasoline and diesel prices in 360 cities nationwide to search for pricing anomalies that might indicate anticompetitive conduct and to take action where appropriate.

The FTC is also a member of the Oil and Gas Price Fraud Working Group of the Financial Fraud Enforcement Task Force. The working group is an interagency effort by state and federal enforcement and regulatory agencies to ensure a comprehensive approach in monitoring and sharing information about the oil and gas markets.

The report also examines the effect of the Organization of Petroleum Exporting Countries (OPEC), which Leibowitz called "a cartel that tries to restrict oil output, and which would be a criminal conspiracy if it were run by companies rather than countries."

The FTC's Bureau of Competition works with the Bureau of Economics to investigate alleged anticompetitive business practices and, when appropriate, recommends that the commission take law enforcement action.