CAMARILLO, Calif. -- Just how high would retail gasoline prices have to be to make the Chevy Volt (or the Honda Civic CNG or the Toyota Prius, among others) competitive with basic gasoline-burning vehicles? A flex-fuel car would require a pump price of $6.90 per gallon; a Volt, $12.50, according to a Lundberg Survey report excerpted below. 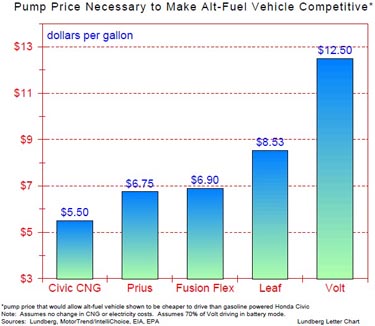 The report focuses only on claims that alt-fuel vehicles are cheaper to drive. It does not account for satisfaction that some motorists take in driving "green" vehicles. Lundberg defines "competitive" in terms of cents-per-mile cost.

Lundberg has made the full report, "Alt-Fuel Vehicles Remain Uncompetitive New Study: Costs of Alt-Fuel Cars vs. Gasoline," available for free to nonsubscribers via CSP Daily News (registration frquired). Click here to read the full report, including details on specific models, as well as charts and methodology.

[Editor's Note: The opinions expressed in this story are those of the Lundberg Survey, and do not necessarily reflect the opinions of CSP Daily News.]

The gasoline-powered car still leaves the alternatives in the dust--despite the subsidies, higher gasoline prices and hype.

Despite all the cajoling, few stations have installed E85 pumps, blender pumps, CNG fueling or electric charging facilities. Lundberg finds that this slow/barely existent adoption of alt-fuel equipment is not due to apathy or ignorance, but due to basic economics: Sales to alt-fuel motorists are tiny and are not poised for rapid growth.

Neither retailers nor motorists fall for the hype in big numbers. In this report, Lundberg compared the economics of a variety of vehicles (gasoline, ethanol, hybrids and others) in several ways.

It's clear despite wishful thinking by some that alternative vehicles are not competitive and that is why they don't sell. What would it take to make them competitive? How high would retail gasoline prices have to be?

Obviously at some certain point, surging gasoline prices allow for alt-fuel vehicles to compete with gasoline-powered vehicles. For example, hybrids would not have captured 2% of vehicles sales if pump prices had remained sub-$2 per gallon.

For more than two decades, proponents of alternative fuels and vehicles (aka disparagers of petroleum fuels and vehicles that use them) have trumpeted that soon, very soon, consumers' individual transportation needs would be filled by electric cars, methanol, fuel cells, hydrogen, CNG and other cars, exotics with infra-structure at stations replacing traditional pumps and tanks. They admitted that it would take government "leadership" and grant money, but predicted that motorists would love them so much that the subsidy crutches wouldn't be needed for long. The twin rationales have been and continue to be: that oil is bad for the environment and bad for national security.

The campaign to replace the nation's service station population with a new network of alternative fueling stations relies on many myths, including these:

Myth: Alt-fuel vehicles are coming on strong so retailers must hurry up and invest in serving them in order to survive.

Reality: Those vehicles have garnered a tiny slice of vehicle sales despite mandates for government fleets, tax-break bribes and celebrity photo-ops.

Myth: Stations providing E-85 for flex-fuel vehicles are the wave of the future.

Reality: Devoting a tank and pump to E85, or installing blender pumps, is a losing proposition. Most retailers that installed E85 have a financial boondoggle on their hands.

Myth: Giving up a fuel position or parking space at a station for electric-vehicle (EV) charging is urgent for gaining a head start on the competition.

Reality: There is no indication that the cost of adding electric charging will be recouped. The revenue loss of giving up a gasoline or diesel fueling position or parking spot for store customers will not be offset by the rare EV motorist visit.

Myth: The only impediments to E15's broad advancement is the question of retailers' immunity for engine damage and the availability of government funding for equipment.

Reality: The essential impediment to E15, as with E85, is that customers do not want to buy it. The biggest reason is that mileage is worse than with E10.

As for the latest proclamation--that algae will, via ladling out government gravy for development, replace gasoline--it's too soon to give it even myth status.

The failure of alt-fuel schemes of late, most spectacularly Solyndra, has eroded public support. If the momentum in the doling out of massive public funds to support uncompetitive fuels and vehicles falters, then both retailers and consumers invested in so-called alternatives will be left holding the bag.