CAMARILLO, Calif. -- The U.S. average pump price for regular gasoline dropped 1.66 cents per gallon over two weeks. Over one month, it is down 3.34 cents. Retail margin is a hungry 10.93 cents, having lost 10.49 cents since June 26, according to the most recent Lundberg Survey of approximately 2,500 U.S. gas stations. 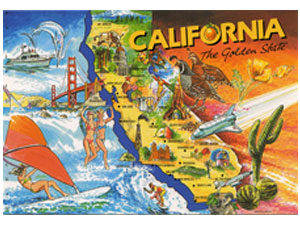 The downdrift of the U.S. street price would have been steeper if not for California, which is suffering a supply crisis. The average street price in the state rose nine cents over two weeks, and in a special July 11 West Coast survey Lundberg found California retail prices shot up about another 12 cents while Pacific Northwest prices were mostly unchanged.

Many California retail margins and some fed by California supply have been capsized. In San Diego and Los Angeles, the worst hit by the supply crunch, July 10 margins were nearly 18 and 16 cents negative.

But the crisis is destined to end soon as the wholesale price differential between troubled California markets and others, elsewhere in the United States and abroad, spells huge financial incentive for additional gallons to come in. It is a magnet of much more than $1 per gallon that they cannot resist.

California was already tight after refining glitches with one plant still down, experiencing year on year demand growth, then recently lower prices deprived non-California gallons of enough incentive to migrate into the state. California is panting for imports. The recent wholesale price spikes are the upcoming cure for the supply crisis.

Other markets where margins are severely pinched in the July 11 snapshot include Albuquerque, Billings and Charleston, S.C.

While retailers lost half their margin on average nationally in these two weeks, refiners got a gasoline margin bonanza. Lower crude oil prices--gifted to them by an oil market concerned about demand thanks to Greece and China economic troubles and about supply thanks to a still possible agreement with Iran unleashing more oil--spell opportunities for refiners to slash wholesale gasoline prices to chase sales. This is how many retailers now in hot water will be rescued.