LA CROSSE, Wis. -- Kwik Trip Inc. celebrated the opening of its 15th compressed natural gas (CNG) station on Aug. 28 in Janesville, Wis. The company plans to add an additional 10 stations before the end of the calendar year. 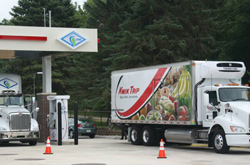 Kwik Trip has committed to developing a functional CNG fueling infrastructure throughout Wisconsin, Minnesota and Iowa.

The company plans to expand availability throughout its current network of stores as well as building new fueling locations. This will allow it to provide the best and most functional natural-gas vehicle fueling infrastructure possible.

Kwik Trip believes that, in order to be successful, it needs to drive both natural-gas vehicle (NGV) adoption and simultaneously build a functional infrastructure for its customers. It will leverage its vertical integration model to help foster the growth of NGVs in its market. Kwik Trip's own distribution fleet, Convenience Transportation, travels 18 million miles on an annual basis. Through this fleet, it is testing, evaluating and promoting all classes and sizes of vehicles, based on the company's real-world experiences.

It currently owns and operates 50 NGVs, ranging from light-duty vehicles to heavy-duty Class 8 semis, with plans to continue the transition of its entire fleet to run on natural gas.

Kwik Trip is the one of the largest convenience store chains in the upper Midwest. Based in La Crosse, Wis., it operates more than 400 stores in three states--Wisconsin, Minnesota and Iowa. Its first convenience store opened in 1965 in Eau Claire, Wis., but the chain did not begin to sell fuel until 1970. From there, Kwik Trip focused on vertical integration, setting it apart from its competitors.