BRENTWOOD, Tenn. -- Mapco Express Inc. has announced plans to sell E15 at new-build and some mega-convenience store sites beginning in 2014, with a longer-term goal of offering the fuel at 100 stores. 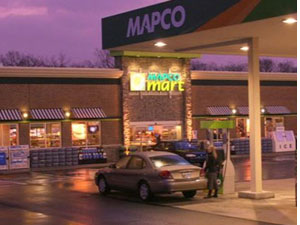 Mapco Express is a subsidiary of Delek US Holdings Inc., Brentwood, Tenn., and operates more than 470 sites in Alabama, Arkansas, Georgia, Kentucky, Mississippi, Tennessee and Virginia.

According to Keith Johnson, a Mapco spokesperson, the chain has not yet decided how many sites or in which states it will begin selling E15. Around 80% of its locations are in Tennessee and Alabama. It is the largest chain since Murphy USA Inc. to announce plans to sell the ethanol blend.

Murphy USA is selling E15 at one site in Arkansas; Mapco has greater ambitions, but has not yet finalized plans for the rollout.

"We're just in the beginning of the process," Johnson told CSP Daily News, noting there is no particular timeline for introducing E15. "We have a program for building new stores--larger-format mega stores. As we continue to build those out, this product will be offered as an alternative, for more options for our customers."

He added that Mapco will assess existing mega stores--which measure around 5,000 square feet--to determine if E15 could be a fit there as well. The chain has announced plans to build 20 new stores per year.

E15, a blend of 15% ethanol and 85% gasoline, has been approved by the U.S. Environmental Protection Agency (EPA) for use in conventional vehicle models 2001 and newer, and flex-fuel vehicles; however, retailers who sell E15 must implement a misfueling mitigation plan (MMP) and register for an annual fuel survey to help reduce the risk of misfueling.

The National Association of Convenience Stores (NACS) and other industry groups have urged retailers to proceed with caution in selling E15, saying liability and compatibility issues--particularly with the fuel storage infrastructure--have not yet been resolved.

Mapco, however, is satisfied with the EPA's findings on E15. "We feel like [E15] gives the customer another option when they are at the store," said Johnson. He did not have details on how or where E15 might be sold at the pump, but said Mapco will follow any regulatory requirements.

In a press release announcing the E15 plans, Dan Gordon, vice president of business development at Mapco, elaborated on the appeal of the ethanol blend.

"We have a long track record of offering new products to our customers and E15 fits in nicely with our current product line up. Ethanol-based fuels have been a lower per-gallon cost alternative over the past few years and this should allow us to offer our customers additional fuel options," he said.

"Based on the performance of this product, our goal will be to add the E15 fuel option to our mega stores as we continue to increase the number of these locations in the future," Gordon continued. "Assuming a successful program, our goal is to have 100 stores offering E15."

MAPCO, Hess Look to Distinguish Themselves in Changing Environment