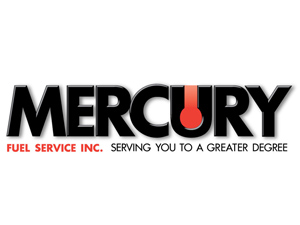 Distributeing wholesale gasoline and fuel oil throughout Connecticut, New York and Massachusetts, Mercury Fuels services 75 branded retail locations, each of which could decide to rebrand to VP Racing Fuels.

"When we reviewed VP's retail branding program, we really liked the image and the other advantages of the program were immediately clear," said Mike Devino, president of Mercury Fuel. "We've distributed race fuels in the past and wanted to continue, so switching to an industry-leading brand like VP was an easy choice. We also wanted to have an additional brand for wholesale customers. Together with the savings we'll realize from VP's low credit-card processing fees and sourcing unbranded supply and the new revenue we'll generate from VP Small Engine Fuel and VP's Madditive performance chemicals, all this will make us much more competitive."

"Mike Devino is a car enthusiast but he's also a businessman who recognized the value in branding with VP," said Jim Kelly, VP's regional manager of race fuel sales. "His new VP station in Plainville, Conn., has already become a destination for performance car, bike and pickup truck drivers who want 101-octane street-legal fuels at the pump."

He added, "Mercury has also embraced the vintage market by stocking a VP Fuel Cube with five-gallon pails of our leaded and unleaded Vintage fuels, while also promoting VP's partnership with nearby Lime Rock Park. Mercury has also made VP100 available in bulk to interested stations in Connecticut and Massachusetts."

"The addition of Mercury Fuel to Team VP is an important milestone in the expansion of our retail branding program," said Matt Schuster, regional manager of branded wholesale development for VP. "Their commitment to VP's program provides yet more proof of the program's viability. We look forward to working together to aggressively grow our presence throughout New York, Massachusetts and Connecticut."

Brothers Mike and Babe Devino started a small retail fuel oil business in Waterbury, CT in 1947, operating out of a three bay garage with just one 500 gallon delivery truck. The business grew to encompass HVAC, wholesale distribution of fuel oil and gasoline, along with retail gas stations and convenience stores. Now managed by the Devinos' second generation, including four brothers and their children, Mercury has adopted many innovations in the heating oil and gasoline business, while remaining committed to being the service-oriented company they started back in 1947.