ALBANY, N.Y. -- New York Governor Andrew M. Cuomo has launched the nation's first state-based Strategic Gasoline Reserve to prevent future supply gaps during severe weather events and emergencies as the next step in the Empire State's Fuel NY initiative. The reserve, which serves as the state's pilot program, is expected to hold three million gallons of fuel for motorists and first responders on Long Island. 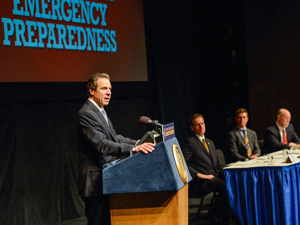 "New York State is leading the nation with the creation of our first Strategic Gasoline Reserve, which will prevent the days of long lines at gas stations if another storm hits," Cuomo said. "The gap in gasoline supplies during Superstorm Sandy was incredibly disruptive to the daily routines of New Yorkers who needed to get to school and work as well as the operations of businesses during an already difficult time. Fuel NY will make our energy infrastructure stronger and better prepared than it ever was before."

Announced in his 2013 State of the State address, the governor launched the Fuel NY initiative in June as a direct response to the gasoline disruptions that occurred during Sandy. Two of the most significant gasoline challenges during the storm were the loss of power at many gas stations--making it impossible to pump gas--and a gap in supplies to stations.

The Strategic Gasoline Reserve will use capacity owned by Northville Industries on Long Island. The $10 million pilot program will help to fill a future supply gap in the event of a declared emergency. As determined by the fuel emergency situation, gasoline from the reserve will be released to meet fuel needs while the industry recovers from a disruption in routine operations. While the reserve was designed as a pilot for Long Island, this reserve could be delivered to other parts of the state as needed. In all emergency scenarios, the reserve will only be used as a supplement to market deliveries, in order to maintain adequate levels of fuels during an emergency recovery. The selection of Northville was chosen through a competitive solicitation and requires formal contract approval.

"The leadership demonstrated by Governor Cuomo in establishing the Fuel NY program is a tremendous step forward for the State in strengthening and securing its energy infrastructure against future storms and emergencies," said John B. Rhodes, president and CEO of the New York State Energy Research & Development Authority (NYSERDA). "The Fuel NY program demonstrates the state's commitment and investment in ensuring critical services that New Yorkers rely upon to meet daily needs are uninterrupted during severe weather events."

Kevin Beyer, president of Long Island Gasoline Retailers Association, said, "We would like to commend the efforts of the governor for taking a multi layered approach to storm and unforeseen emergencies. By putting in place a fuel reserve on Long Island it will help relieve stress on the supply of fuel in a time of crisis. This in turn will keep stations supplied with fuel and help alleviate anxiety to the motoring public."

Hess vs. Cuomo on Generator Proposal