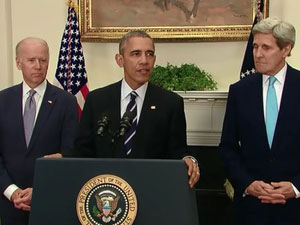 "Secretary Kerry informed me that after extensive public outreach and consultation with other cabinet agencies, the State Department has decided that the Keystone XL pipeline would not serve the national interests of the United States," the president said at the White House. "I agree with that decision."

He added, "For years, the Keystone Pipeline has occupied what I, frankly, consider an over-inflated role in our political discourse. It became a symbol too often used as a campaign cudgel by both parties rather than serious policy matter. And all of this obscured the fact that this pipeline would neither be a [magic] bullet for the economy as was promised by some, nor the express lane to climate disaster proclaimed by others."

The Keystone XL would have linked existing pipeline networks in Canada and the United States to bring crude from Alberta and also some from North Dakota to refineries in Illinois and, eventually, the Gulf of Mexico coast.

The denial of TransCanada Corp's more than 800,000 barrels per day project will make it more difficult for producers to develop the province of Alberta's oil sands, said a Reuters report.

But since 2008 the United States has experienced a drilling boom boosting oil production 80% and contributing to a slump in domestic oil prices from above $100 a barrel to about $44.

"Gas prices have already been falling--steadily--the national average gas price is down about 77 cents over a year ago," said Obama. "It's down $1 over two years ago. It's down $1.27 over three years ago. Today, in 41 states, drivers can find at least one gas station sell gas for less than two bucks a gallon."

Along with the claim that the pipeline would not help retail gas prices, the president laid out additional claims why the State Department rejected the Keystone. "The pipeline would not make a meaningful long-term contribution to our economy. So if Congress was serious about wanting to create jobs, this was not the way to do it," he said. "[And] shipping dirtier crude oil into our country would not increase America's energy security."

The president continued, "The truth is, the United States will continue to rely on oil and gas as we transition--as we must transition--to a clean energy economy. That transition will take some time. But it’s also going more quickly than many anticipated. Think about it. Since I took office, we’ve doubled the distance our cars will go on a gallon of gas by 2025."

Click here to watch the speech, or click here to read a transcript of his complete remarks.

“I wish I were surprised by the president’s decision to reject this jobs and infrastructure project," Senate Majority Leader Mitch McConnell (R-Ky.), said. "But it’s become painfully clear that the president is more interested in appeasing deep-pocketed special interests and extremists than helping tens of thousands of Americans who could have benefited from Keystone’s good jobs. Given this project’s importance to North American energy independence, the question still remains not if but when Keystone will be built. Republicans have no intention of giving up on common-sense jobs ideas like Keystone. Our nation’s long-term need for the energy and jobs Keystone would provide will certainly outlast the little over a year remaining in the term of the current administration.”

The Petroleum Marketers Association of America (PMAA) said it is "is extremely disappointed with the President’s decision letting politics play into his decision instead of sound policy."

American Petroleum Institute (API) president and CEO Jack Gerard said the president’s rejection of the Keystone XL pipeline is a clear example of politics coming before the interests of U.S. workers and consumers.

“It’s ironic that the administration would strike a deal to allow Iranian crude onto the global market while refusing to give our closest ally, Canada, access to U.S. refineries,” said Gerard. “This decision will cost thousands of jobs and is an assault to American workers. It’s politics at its worst. Unfortunately for the majority of Americans who have said they want the jobs and economic benefits Keystone XL represents, the White House has placed political calculations above sound science. Seven years of review have determined the project is safe and environmentally sound, yet the administration has turned its back on Canada with this decision, and on U.S. energy security as well.”