HOUSTON -- At a time when the national average for regular gasoline has hit $3.76 per gallon, the allure of natural gas, at $1.85 per gasoline gallon equivalent (GGE), is undeniably strong. It’s in this environment that the nation’s second largest natural-gas producer and a technology giant hope to fast-track the development of the U.S. natural-gas fueling infrastructure. 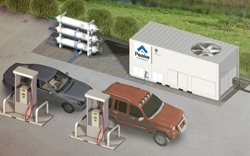 Last week, Chesapeake Energy Corp. and GE announced a collaboration to develop infrastructure solutions to help accelerate the adoption of natural gas as a transportation fuel. The first tangible evidence of this collaboration: the introduction of more than 250 “CNG In a Box” modular and standardized CNG compression stations.

Included in the “box” is a gas compressor with storage, cooling, drying and controls, as well as GE Wayne dispensers with credit-card capability and provision for a POS interface. The plug-and-play unit comes in an 8-by-20 or 8-by-40-foot container, depending on a site’s volumes.

The plug-and-play CNG fueling offer is a product of GE’s ecomagination-qualification process, which aims to accelerate the development of clean-energy technology that meets high environmental and innovation standards. The companies will officially debut the CNG In a Box product, along with pricing details, at the NACS Show in Las Vegas this October.

“Right now, the public infrastructure is lacking,” Kent Wilkinson, vice president of natural gas ventures, told CSP Daily News. According to U.S. Department of Energy numbers, less than 1,000 CNG fueling stations exist in the United States, with most in California, New York, Utah and Oklahoma, where Chesapeake is based. Only one-half are open to the public. This compares to more than 6,300 electric-vehicle (EV) charging stations, for example.

High entry costs and the seeming complexity of current CNG fueling technology have been major hurdles toward wider growth. The multiyear collaboration between Chesapeake and GE, which will also include aftermarket services for the natural-gas fueling infrastructure and development of home refueling systems, aims to target the these issues, merging not only two well-known brand names, but also harnessing their respective scale.

“We take the demand and Chesapeake’s scale, go to GE--a world-class, global supply-chain manufacturer--and use their scale to lower the cost of producing equipment so that we can accelerate the adoption rate significantly by making product that is more like a normal gasoline fueling experience,” said Wilkinson. “[We] get it scaled so we can lower manufacturing costs. [We] get the design down so it’s plug-and-play, so all of those c-stores don’t have to become experts about things they don’t know about.”

While he couldn’t comment on costs, Wilkinson said the fueling station’s 400-horsepower compressor is designed to deliver 7.5 GGEs per minute. “Our target was to be able to do 400 horsepower at a 250-horsepower cost, and it looks like that’s exactly what we’ve achieved,” he said. Although the federal tax credit for CNG infrastructure investments expired at the end of 2011, several states offer their own rebates and incentives that can shave up to three-quarters of the price off of the installation.

On site, all a retailer would need is a natural-gas hookup and room for the components.

“It takes the intimidation factor out of it,” said Wilkinson, noting the collaboration features two well-known names--Chesapeake on the supply side, and GE’s hardware and technology chops. CNG In a Box will be brought to market by Chesapeake affiliate Peake Fuel Solutions.

According to the companies, a natural-gas vehicle (NGV) driving 25,700 miles per year would enjoy reduced annual fuel costs of up to 40%, assuming gasoline priced at $3.50 per gallon and CNG at $2.09 per GGE.

As with a conventional CNG installation, a retailer implementing CNG In a Box should identify an anchor tenant who can provide a base of volume for the fuel.  For convenience stores, this means small fleets with three-quarter-ton CNG-powered pickups up to medium-duty trucks. With Chrysler, Chevy and Ford recently announcing new CNG-powered pickups to their fleets, the customer pool is widening, says Wilkinson.

“The whole argument about chicken-and-egg is now gone,” said Wilkinson. “You have OEMs bringing out products. You have this product coming out for infrastructure. You really see people tackling the challenges of the day and saying we can solve those, and enabling the market to adopt natural gas as a vehicle fuel.”