WASHINGTON -- President Barack Obama discussed energy and rising gasoline prices in a meeting with AAA. Following his speech on energy issues in Cushing, Okla. (click here for a transcript of the speech), the President spoke to a representative of the nation's largest auto club. 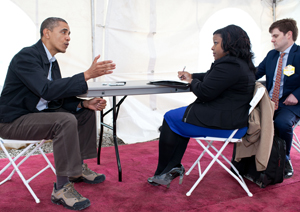 As an advocate of motorists nationwide, AAA asked the President questions likely to be foremost in the minds of drivers feeling the pain at the pump.

The meeting occurred while the President Obama was on a four-state tour--Nevada, New Mexico, Oklahoma and Ohio--to tout his energy plan amid intensifying GOP attacks on the White House over soaring gasoline prices.

Commenting on the frustration and confusion motorists are experiencing with rising gasoline prices, the President said, "I understand what folks are going through because it wasn't that long ago that I was having to fill up my gas tank and drive to work, shuttle the kids back and forth to school or events. It takes a big bite out of folks' paychecks."

He said that the United States has experienced cyclical gasoline prices for decades and stressed the importance of America having more control over its own energy security.

AAA also inquired about the role of the President in addressing prices at the pump given the global forces and political tensions abroad that drive the oil and energy markets. The President said, "The most important thing I can do as the President is not to simply focus on tomorrow. It's focusing on getting America properly aimed toward our goal of continuing to reduce our dependence on foreign oil."

The President also highlighted the importance of maintaining growth and productivity while further reducing U.S. oil consumption. He noted that pressure on oil prices in the coming two decades will be difficult to reverse.

As to public acceptance of new technologies, the President said, "People need to feel confident that when they get into an electric car they're not going to get stuck. To the extent that we start having both more efficient batteries and distribution capacity, people can feel confident that they're never going to get stuck, or at least not any more stuck than they do when they forget to fill up and then call AAA."

The President also shared insight about the role of alternative-fuel vehicles as a possible solution to current high fuel costs. He noted that fuel efficiency standards for cars and trucks have doubled, which will result in fewer trips to the gas station and a savings for the average family of about $8,000 over the life of the car.

While the President is no longer able to do his own driving, AAA asked President Obama about his first car. "I have to confess, my first car was my grandfather's car, which was a Ford Granada," he said. "It rattled and it shook, and I don't think the girls were particularly impressed when I came to pick them up in a Ford Granada. But you know what? It moved, and so I have fond memories of the fact that it got me to where I needed to go."

Click here to read the full transcript of AAA's interview with President Obama.

"With the pump price of gasoline already above $4 a gallon in some parts of the country, this added regulatory burden would increase the per gallon cost of manufacturing gasoline by between six and nine cents.

"More importantly, EPA has yet to demonstrate any air quality benefits from reducing sulfur in the amount proposed. And, as the Baker & O'Brien analysis also shows, implementing the new requirements would increase greenhouse gas emissions because of the use of energy-intensive hydrotreating equipment to remove sulfur from the gasoline.

"We urge the administration to take a step back on Tier III and its other proposed rules. We must be sure that new regulatory proposals are necessary, properly crafted, practical, and fair to allow U.S. refiners to remain competitive, preserve good paying refinery jobs, and ensure our energy security."