CAMARILLO, Calif. -- The U.S. average retail price of regular grade gasoline rose 4.22 cents in the past two weeks to $2.8395 per gallon, according to the most recent Lundberg Survey of approximately 2,500 U.S. gas stations. The rate of increase has greatly slowed versus the prior five weeks when the average zoomed 35 cents per gallon. 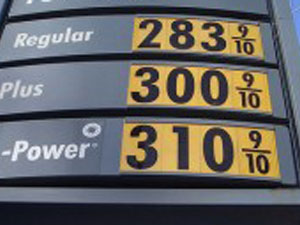 Retail margin looks far better now, at over 18 cents per gallon, versus the meager dime two weeks ago and less than 6 cents five weeks ago. Average margin is the best since late March.

An important input to the early May pump price surge was the California market, as extreme price hikes pulled up the national average an extra amount. Now California prices are ebbing some with improved supply, but prices aren't likely to fully reverse their rise because this year's state regulations and permit fees enforcing the Global Warming Solutions Act will continue hitting the pump and even increase.

Overall, the U.S. gasoline market is well supplied and the refining capacity use rate is more than three percentage points above what it was a year ago. Little upward price pressure is likely either from refining or retailing gasoline margins, because both are attractive now. In California retail margin is stellar. In the greater Los Angeles market, where the average retail price is still highest in panel of cities in the lower 48 states, the average margin exceeds 44 cents in the May 29 snapshot.

From here, it would take an important oil price hike to cancel the imminent peaking of the national average pump price.

Gasoline demand is strong, and the street price is 85 cents under its year ago point--in all, pretty good refining, retailing and consumer prospects for the summer driving season 2015.