LOS ANGELES -- The year 2015 has marked the debut of several on-demand fueling services. Providers such as FuelMe, Filld and Purple offer consumers the convenience of gasoline—and sometimes diesel—fillups where and when they want it. A la Uber, customers use a smartphone app and/or a Web site to order fuel, eliminating the need to visit a gas station. Another on-demand fueling service has just launched, and this time, it has alternative aspirations. 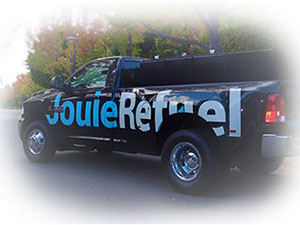 The couple was inspired to create Joule Refuel after moving to California and noticing how wildly retail gas prices varied from stations that were located within only a mile of each other. Why were some stations able to sell gas at a more than $1-per-gallon premium? The answer: convenience.

And there, inspiration struck. “What’s more convenient than getting it delivered to you?” Rebecca Suissa told CSP Daily News.

Customers can order a fillup of regular, premium or 100-octane gasoline via the Joule Refuel web site (an app debuts this month), as needed or via subscription for recurring fillups. This subscription model is unique to Joule Refuel, inspired by the Amazon Prime membership program, which offers free shipping and other perks for an annual fee.

“Also it’s really an encouragement for users to use us consistently,” said she said.

Joule Refuel is also working on an on-board diagnostic device that can track customers’ fuel level and ultimately trigger a new fill-up order as needed.

“We definitely want to be more on-demand to the point where you don’t have to do anything,” she said.

Customers currently number around 145 and include residential and corporate clients, although the company plans to expand into fleets.

Joule Refuel charges no delivery fee, and it prices its gasoline around the average for its Los Angeles-area market—“not the cheapest, not the most expensive,” according to Rebecca Suissa. Customers can order as much or as little gasoline as they want. For now, deliveries are available on weekdays only from 5 a.m. to 11 p.m., within 3-hour windows. Two hazmat-trained drivers deliver the fuel; Joule Refuel said it complies with state and local weights and measures and safety regulations.

But it’s the potential beyond gasoline where Joule Refuel really hopes to differentiate itself—particularly with compressed natural gas and hydrogen.

“That’s the vision for the company—to get into the renewable fuels space,” she said. “The gasoline arm of the company is really a proof of concept to show the consumer is willing to buy this service.”

“When they go offline, they go off for months at a time,” Rebecca Suissa. “That’s an enormous inconvenience for [consumers], and it turns them off from pursuing a lease. It’s crucial to helping the renewable economy along by having dependable refueling.”

There are a lot of hoops Joule Refuel will need to jump through to begin offering on-demand hydrogen refueling. This includes getting approval from state regulators and hydrogen vehicle manufacturers for the refueling equipment.

But the company is nothing if not ambitious. And it has aspirations beyond California, hoping to one day soon support clients across the country, whether fueling them with gasoline or the next alternative.

“Our motto is: ‘Changing the face of fuel,’” she said. This is as much about decentralizing the fueling process—bringing fuel to the driver—as it is about providing a convenience, she explained. Once the service expands beyond gasoline, the hope is by making fueling convenient, it will ease the adoption of new fuels. We really want to change the way users refuel, because that’s the only way we can change to a renewable economy.”