WASHINGTON -- Nearly two-thirds of states have pushed past the 10% ethanol blending wall for gasoline.

In 2016, 30 states and the District of Columbia had an average ethanol blend rate higher than 10%, the Renewable Fuels Association (RFA) announced. The ethanol industry group cited the latest ethanol consumption figures from the U.S. Energy Information Administration (EIA). (Data for 2017 should be available in late 2018.)

States pushing past the 10% blending average for the first time in 2016 were Colorado, Idaho, Montana, Wyoming and Texas. The lowest blending rate among the states was 9.43%, with blending averages of 10% and lower primarily in the mid-Atlantic and Southeastern regions.

Bob Dinneen, president and CEO of Washington, D.C.-based RFA, said the EIA data demonstrates that the idea of a blending wall for ethanol—the maximum amount of ethanol that can safely be blended into the gasoline pool—is unfounded.

“Increased consumption of E15, midlevel blends like E20 [and] E30 and ethanol flex fuels like E85 have reduced the so-called blend wall to a pile of rubble,” said Dinneen, noting that more than 4,000 locations in the United States sell E85 and about 1,300 stations sell E15. “The share of renewables in our nation’s motor fuel will only continue to grow as more retail stations and consumers recognize the value of higher ethanol blends.” 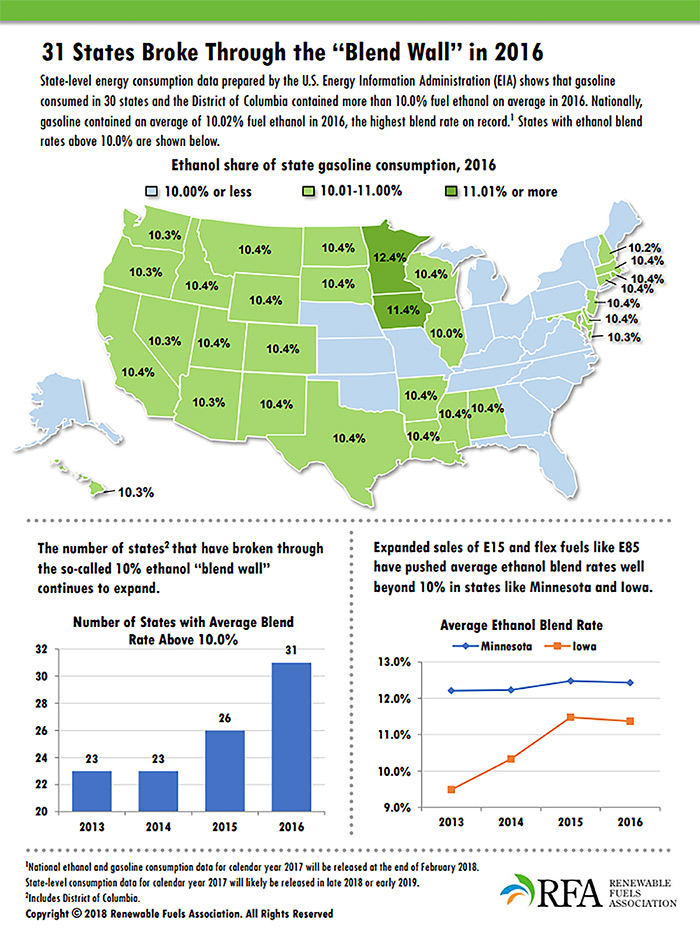