WASHINGTON — In an early sign of the effect of year-round sales on E15, gallons for the 15% ethanol blend did not drop dramatically heading into the summer in Minnesota, a state with one of the highest numbers of E15 locations.

In late May, the U.S. Environmental Protection Agency (EPA) issued its final rule on year-round sales of E15, just before seasonal sales restrictions were set to begin on the 15% ethanol blend. Prior to this action, E15 was unavailable for sale to any vehicle other than a flex-fuel vehicle from June 1 to Sept. 15 in most markets because of summertime Reid vapor pressure (RVP) restrictions.

In August, the Minnesota Department of Commerce released data showing that gallons of E15 held relatively steady in June 2019, the first full month since the federal waiver was granted. This compares to a pattern in previous Junes when gallons would plummet as the former restrictions took effect. For June 2019, the state reported nearly 6.3 million gallons of E15 sold, compared to less than 3.7 million gallons in June 2018. Among the 31 states that have the approximately 1,800 E15 locations, Minnesota is one of the only to regularly report volumes for the ethanol blend.

In an analysis of the data, the Renewable Fuels Association (RFA), an ethanol industry group, said gallons “virtually doubled,” and that the number of Minnesota fueling sites selling E15 increased 18% from June 2018 to June 2019.

“The data from Minnesota confirm that the market is already reacting positively to the elimination of the unnecessary and ridiculous summertime restriction on E15,” said Geoff Cooper, president and CEO of Washington, D.C.-based RFA. “In the past, when the calendar flipped to June, E15 sales volumes would begin a summerlong nosedive because of EPA’s antiquated gasoline volatility regulations. But because President Trump kept his promise to remove the summertime barrier to E15, those days are over and retailers now have the ability to sell E15 all year long.”

However, Cooper charged that a series of small refinery exemptions granted by the EPA under President Trump have destroyed greater E15 demand. The RFA said E15 volumes per site have trended slightly below year-ago levels in recent months. It blamed lower biofuel blending quotas in the Renewable Fuel Standard (RFS) and lower prices for Renewable Identification Numbers (RINs), credits that obligated parties such as refiners use to demonstrate compliance to their RFS blending obligations. The association said that, from December 2018 to May 2019, E15 sales per station were an average of 13% lower than the same time period the year before. RIN prices, meanwhile, were three times lower.

“These data provide further evidence that EPA’s rampant issuance of RFS small-refiner exemptions is suppressing growth in E15 and other higher-level blends,” Cooper said. “The bailouts given to refiners in recent years led to a collapse in the price of RFS compliance credits, which provide the marketplace with a powerful incentive to expand E15 availability. That incentive is greatly diminished when credit values are very low—as is currently the case.”

The RFA asked the Trump administration to use more restraint in issuing the small-refinery waivers, which are designed to relieve small refineries under financial distress of their RFS blending obligations. The EPA is currently weighing 40 additional small-refiner exemption requests. 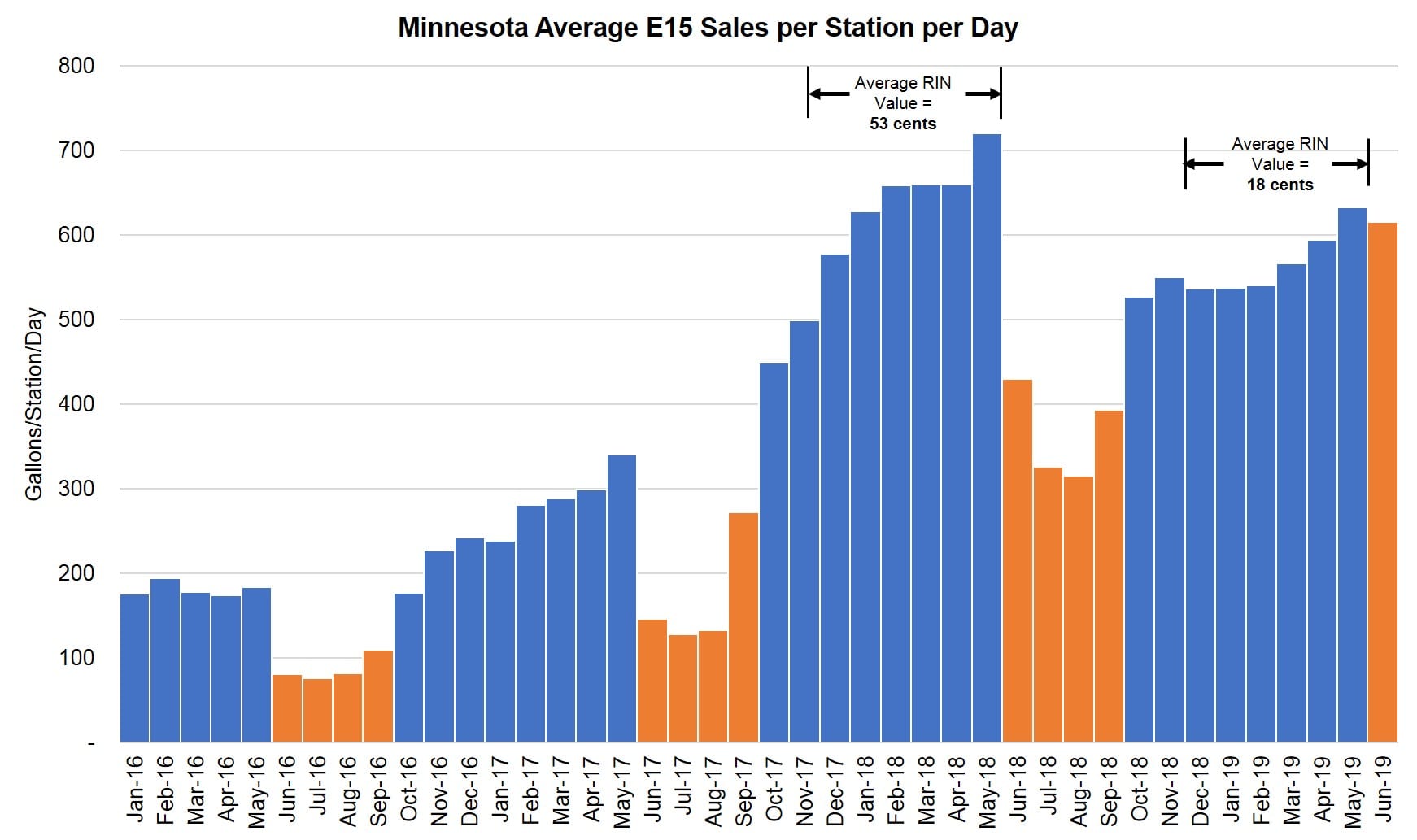 Growth Energy and GasBuddy Team Up on E15

Year-Round Sales to Give E15 an Incremental Boost