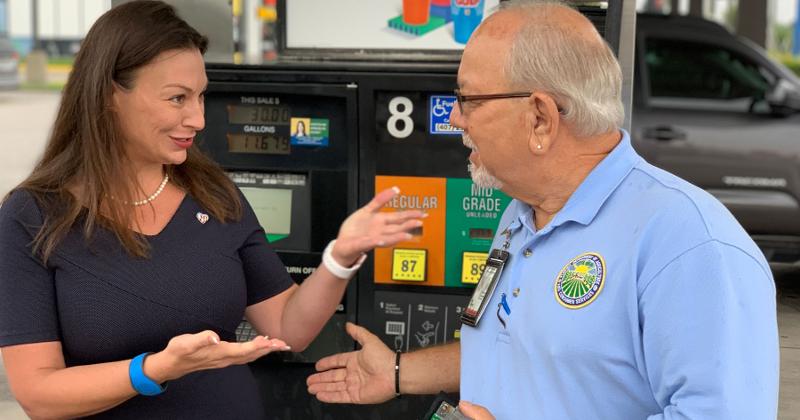 Photograph courtesy of Florida Department of Agriculture and Consumer Services

AUSTIN, Texas, and TALLAHASSEE, Fla. — Texas and Florida, two states battling an uptick in skimmers at fuel pumps, have seen mixed success recently in tackling the issue through legislation.

This June in Texas, Gov. Greg Abbott signed into law House Bill 2945, which gives the Texas attorney general rulemaking authority to implement policies and procedures for fuel retailers to follow to prevent skimmer installations on gas pumps. In crafting these best practices, the attorney general must consider compliance costs for the retailer, emerging technologies and the effect of the policies on consumers. The process will call upon retailers to disable any skimmers and notify law enforcement within 24 hours of its discovery.

The bill also creates a payment fraud fusion center, to provide law enforcement with a centralized location and tools to investigate financial crimes.

Abbott also signed HB 2624, which enables those accused of payment fraud to be prosecuted in any county in which the crime was committed, or in any county in which a victim whose information was stolen resides. And HB 2625 introduces more severe penalties for criminals caught with five or more counterfeit cards, ranging from a third-degree felony to a first-degree felony depending on the number of fraudulent items. All three bills will go into effect on Sept. 1.

"This is a problem that Texas will take the lead on and become a model for other states,” said Perez. “I appreciate the stakeholders coming together on this issue, but more importantly, the overwhelming support I have received from the Texas House of Representatives. I am proud that we, together as a body, will combat credit-card skimming at gas pumps in Texas."

Legislators in Florida, which is said to have the highest fraud rate per capita in the United States, are being asked to revisit legislation that would crack down on fraud at the pump. This is after two bills—Senate Bill 1652 and House Bill 1239, which would have created a statewide Consumer Fraud, Identity Theft and Skimmer Working Group interagency task force—failed to pass during the 2019 session. The task force would have developed solutions to stop skimmers, and it would have included members appointed by state cabinet officials, as well as legislators, industry groups, credit-card companies, consumer advocates and fraud victims.

Florida Commissioner Nicole “Nikki” Fried (pictured, with Inspector Joe Scobbo) championed the legislation and plans to see it filed in the next legislative session. She took part in a fuel-pump skimmer inspection this June to draw attention to the problem in central Florida. In a statewide sweep, the Department of Agriculture and Consumer Services found 259 skimmers, with 15 in the Orlando area. Investigators have found more than 2,800 skimmers in Florida since 2015.

“Florida is known for beaches, oranges, Disney, but also fraud—we are the top state for scams, and we can't let that continue,” said Fried. “It's important we're sharing with consumers exactly what to look for, because each skimmer can defraud consumers up to a million dollars. We're here to let Floridians know there's a lot of fraud out there, but we're working with law enforcement to crack down on this criminal activity.”

In 2018, Florida consumers filed 15% of the 1.4 million fraud reports to the Federal Trade Commission, even though the state accounts for only 6.5% of the U.S. population.

Secret Service Cracks Down on Skimmers