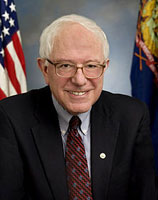 He asked the U.S. Department of Justice and the Federal Trade Commission (FTC) to conduct a joint investigation to determine why gasoline prices in Chittenden, Grand Isle and Franklin counties are substantially higher than other parts of the state, New England and similar areas throughout the country.

In his letter to U.S. Attorney General Eric Holder and FTC chairman Jon Leibowitz, Sanders asked them to determine whether high prices in Chittenden County were related to the fact that the four largest gas station companies in the county control 67 of the 115 stations, or 58% of the total.

Click here to read the full text of his letter to Holder and Leibowitz.

During one month, prices in greater Burlington fell 15 cents a gallon--from $3.84 to $3.69 for regular unleaded. That's the lowest price reduction in any of the 15 metro regions throughout New England, according to AAA's Daily Fuel Gauge Report data. The average price drop at these New England metro areas for a gallon of regular unleaded was 25.9 cents during the month examined.

Greater Burlington, as defined by AAA, includes Chittenden, Grand Isle and Franklin counties. The analysis conducted by Sanders' office used the AAA data for monthly gasoline price changes with the month ending June 25. During this same time period, prices fell as much as 34 cents per gallon in Manchester, N.H.

Vermont often sees a price discrepancy with neighboring states. On July 2, for example, Vermonters paid an average of $3.55 a gallon for regular unleaded. Meanwhile, motorists in New Hampshire paid $3.36 a gallon, on average. The modest seven-cent tax differential between the two states does not explain this 19-cent price discrepancy, which is even greater--27 cents a gallon--when compared with greater Burlington, where regular unleaded sold for an average $3.63 a gallon according to AAA data.

In Middlebury--35 miles south of Burlington---prices were as low as $3.35 a gallon on July 2 and most gas stations there sold fuel for no more than $3.40 a gallon, according to VermontGasPrices.com Meanwhile, on the same day, a gallon of regular unleaded in St. Albans cost at least $3.63 a gallon. At some Burlington stations, a gallon of gasoline was just under $3.70.

For a 20-gallon fillup, the quarter more a gallon paid at some stations in greater Burlington translates to a $5 premium on a tank of gasoline.