FREDERICK, Md. -- Wawa Inc. held the grand opening of its newest Frederick, Md., gas station and convenience store, its 400th fuel store chain-wide, on Sept. 5. The celebration included a special fuel-focused customer giveaway, a charitable hoagie building competition between members of the Frederick County Sheriff's Department and the Westview Fire Co. and free coffee for the first 10 days the store is open. 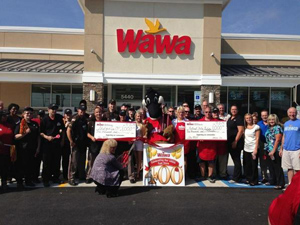 To mark the grand opening of its first Maryland store opening in 2014 and the milestone 400th fuel store, the first 400 fuel customers received a $10 Wawa gift card.

"In 2014, we made a vow to expand the Wawa experience to more customers than ever before, and today we're taking that commitment to the next level, not only with our new Frederick store, but with our 400th fuel location," said Chris Gheysens, Wawa, Pa.-based Wawa's president and CEO. "When we opened our first fuel location, it was because we wanted to provide our customers with the best fuel quality and prices possible--so that they could fuel up fairly every time. And today, we're continuing that same commitment and striving to not only serve, but fulfill our customers' lives every day right here in Frederick."

The grand opening of this new store marks its 400th fuel location across six states, Pennsylvania, New Jersey, Delaware, Maryland Virginia and Florida. While Wawa is now known for its fuel offer, it is a fairly recent addition to the company's history. Wawa opened its first fuel store in 1996 in Millsboro, Del. Today, it operates nearly 660 stores across a six state region, 400 of which offer fuel (and 250 of which offer diesel).

With the addition of fuel to the stores more than 15 years ago, the convenience stores became larger, offered more parking and added more convenience.

Bockius will serve as general manager of the store, leading a team of nearly 60 associates, all new positions brought to the area through the development of the store. "2014 is a milestone year for us at Wawa as we open 45 new stores--including our 400th fuel store--celebrate our 50th anniversary in retail and extend our commitment to fulfilling lives in more ways than ever before," said Gheysens. "As we celebrate the grand opening of our Frederick store, we celebrate our Frederick family, as well as our great associates that build lasting relationships with people and communities on deeper levels."