WASHINGTON -- Since around 2010, premium-grade gasoline’s price differential to regular grade has doubled, but why? A recent study conducted on the behalf of the U.S. Energy Information Administration (EIA) has ruled out upstream factors and instead suggested downstream dynamics behind the growing price differential. 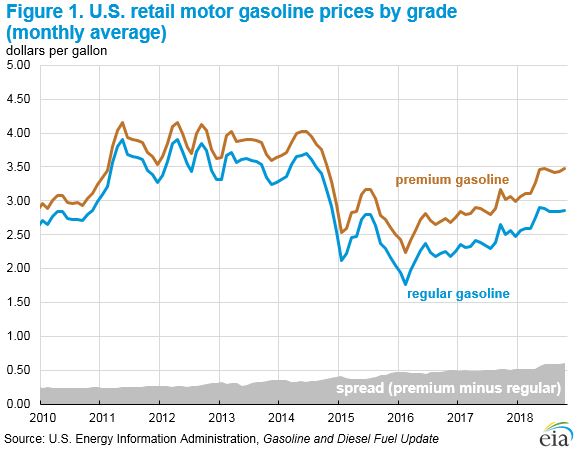 While this growth trend occurred in all Petroleum Administration for Defense Districts (PADD), it varied by region. For example, the spread grew the most in the Midwest, up 34 CPG from 2010 to 2017 to reach 56 CPG. The West Coast saw the smallest increase, up 8 CPG to reach 31 CPG in 2017.

The EIA commissioned Baker & O’Brien Inc. to study whether changes in U.S. refinery operations could explain the growing spread. In the process, the research determined:

The researchers hypothesize that two different retail pricing dynamics may be behind the growing spread. One is the different price movement behaviors of regular and premium gasoline. Akin to the “rockets and feathers” hypothesis of gasoline price changes—that is, retail prices tend to increase quickly to cover increased wholesale costs but fall slowly as retailers attempt to make up margin—the theory suggests that the prices of regular- and premium-grade gasoline increase at the same speed but premium prices fall slower.

Separately, the researchers analyzed whether U.S. refiners could meet the demand for higher-octane gasoline if the country were to adopt a new, higher-octane gasoline standard as proposed by automakers in 2018. The big three automakers—General Motors (GM), Ford and Fiat Chrysler—support the adoption of a 95-RON (research octane number) gasoline, which would ultimately replace all other grades as the vehicle fleet turned over.

In their study, Baker & O’Brien assumed that, beginning with vehicle model year 2023, all light-duty vehicles would require a minimum 95 RON gasoline. The researchers modeled what gasoline markets and octane requirements would look like in 2027, and concluded that by then, 29% of total gasoline consumption would be 95 RON. The study found that refineries could meet this level of demand without significant changes to their configuration or throughput, and without blending in additional ethanol. Refiners would instead increase reformer severity to create higher-octane blend stock, and then blend it with 10% ethanol to create 95 RON gasoline.

In response to the findings, Geoff Cooper, president and CEO of the Renewable Fuels Association (RFA), Washington, D.C., said, “This study confirms that a 95 RON requirement by itself would do nothing to expand the market for ethanol, even though ethanol will continue to reign as the cheapest and cleanest source of octane available on the market."

RFA supports moving to an even higher-octane standard between 98 and 100 RON to deliver sufficient efficiency gains and emissions reductions.

The Turbocharged Rise of Premium Fuel

Why Automakers Are Pushing for a Single Gasoline Grade