DALLAS -- With a successful foray into an environmentally conscious fuel program, officials with Alon Brands told attendees at CSP’s recent Convenience Retailing University (CRU) conference that it intends to expand the program to a second city. 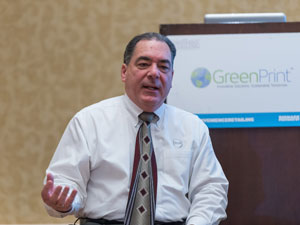 [Editor's Note: The company has announced that it is launching the Strive – Reduced Emissions Fuel Program in Lubbock, Texas.]

The highly conceptual program swaps emission rates with activities that involve improving air quality, such as planting trees. Done in conjunction with Atlanta-based GreenPrint LLC, the program tells customers that the amount of fuel they purchase translates into a certain number of new trees planted in the area.

Speaking at last week’s CRU conference, Jonathan Ketchum, senior vice president for the Dallas-based Alon Brands, said that the company was expanding the program from a test of 36 stores in Albuquerque, N.M., to the Lubbock, Texas, market in March.

“The program resonated with people from many backgrounds, not just the more affluent, environmentally conscious customers,” Ketchum said.

Since the program began in New Mexico, year-over-year volumes are up, Ketchum said, while the Santa Fe National Forest saw 2,000 new trees and the community experienced a 15,000-ton reduction in CO2 fuel emissions.

He added that the program also drew a substantial amount of local press and social media.

While keeping the Alon brand on pumps and canopies, participating stations receive “Strive” signage, which informs customers that filling up will translate into planting trees. Though Ketchum declined to elaborate on the pricing or cost equation of the program, he said he believes it has made an impact with customers and has a tangible return.

Citing customer surveys, Pete Davis, founder and CEO of GreenPrint, said the program does improve inside sales as well as customer loyalty.