LAWRENCE, Kansas -- The nation's first E15 (15% ethanol, 85% gasoline) gallons are now selling at the Zarco 66 station in Lawrence, Kansas. Plans to offer E15 at the nation's second retail station, the Zarco 66 in Ottawa, Kansas, are nearly complete with an announcement coming soon. 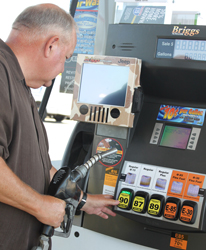 On June 8, 2012, the U.S. Environmental Protection Agency (EPA) gave final approval for the sale and use of E15 ethanol blends in light-duty vehicles made since 2001. This represents nearly two-thirds of all vehicles on the road and nearly three-fourths of all miles driven.

Given present market conditions, E15 will sell for less than E10 and gasoline not containing ethanol, according to Zarco 66. More broadly, a recent study from the Center for Agriculture & Rural Development found the use of 13.9 billion gallons of ethanol in 2011 lowered average gasoline prices by $1.09 per gallon nationally and by $1.69 per gallon in Midwestern states such as Kansas.

"Alternatives to gasoline are critically important to our nation's energy future and Americans deserve to have a choice of cost-competitive fuel at the pump," said Scott Zaremba, owner of Zarco 66 stations. "With the help of the Kansas Corn Commission, East Kansas Agri-Energy and the Renewable Fuels Association, we are pleased to be the first to offer consumers real choice at the pump in the form of E15 ethanol fuel."

Zaremba, vice president of the Petroleum Marketers of Kansas, blends Zarco 66 fuel options right at each of his stations. Pumps offering E15 with the proper labeling will also be offering E10 and other ethanol blends via technology known as blender pumps. These pumps allow consumers to choose the fuel option that is best for them and their vehicle.

"America's farmers, together with America's ethanol producers, have risen to the challenge to provide a safe, reliable, and growing source of renewable fuel. E15 and increasingly higher ethanol blends will reduce our dependence on imported oil, create domestic jobs that cannot be sent overseas, and leave a cleaner environment for generations to come," said Jere White, executive director of the Kansas Corn Commission and the first consumer to purchase E15 under the waiver granted by the EPA.

"By a margin of three to one, Americans are clamoring for real choices at the pump. The roll out and adoption of E15 is the first step in delivering Americans the choice they want and deserve," said RFA president and CEO Bob Dinneen. "E15 has been the most vigorously tested fuel to be approved by the EPA. Ethanol has long proven itself to be a safe and effective fuel for consumers, and E15 will be no exception."