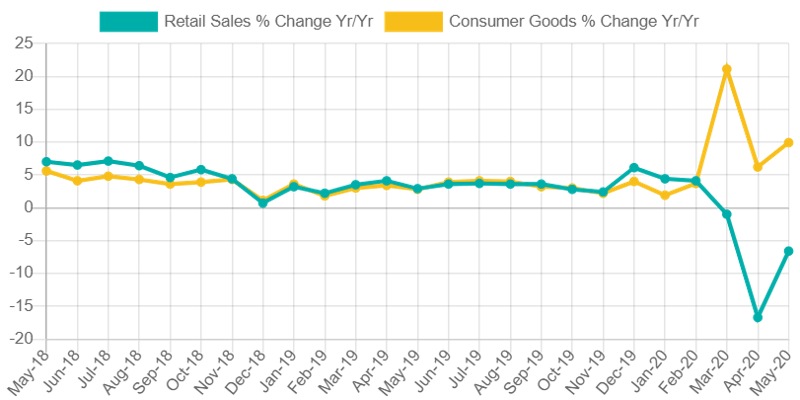 ARLINGTON, Va. — State stay-at-home orders have driven increased demand for consumer packaged goods (CPG), according to a new economic indicator, CPG Economic Pulse, released by the Consumer Brands Association (CBA). The industry experienced 9.9% year-over-year growth during May 2020 compared to May 2019.

The association’s monthly report analyzes the performance of the totality of the industry—food and beverage, household cleaning and personal care products.

The most recent results from May showed an uptick of CPG purchases of 4.1% over April. After the widespread panic buying in March that sent CPG purchases up 21.1% year-over-year, April and May data show some stabilization, though still well above pre-pandemic times. The uptick in May was driven by the need to replenish March stocks and is evidence that the industry should expect heightened demand throughout the COVID-19 recovery, the report said.

“We anticipate elevated demand throughout the pandemic,” said CBA President and CEO Geoff Freeman, “and even beyond, we could see increased at-home consumption as part of a changed world.”

The robust pace of production for CPG companies is set against the backdrop of a struggling economy. Payrolls have rebounded with 7.5 million jobs according to June’s better-than-expected employment numbers; however, recouping the 22 million jobs lost in March and April will be a long-term challenge for the labor market. As a result, many Americans are relying on federal unemployment benefits. Those benefits are, in part, going toward CPG necessities: 86% of U.S. Census survey respondents said they were using at least some of their stimulus benefits to buy food and another 58% said they put it toward household or personal care items, according to Arlington, Va.-based CBA.

A recent CBA poll showed that nearly 9 in 10 (87%) of consumers say their trust in the industry has increased or been maintained as a result of how it has responded to the pandemic, chiefly on how it has consistently delivered high-quality products and how it has treated employees.

Why Campbell Soup Invested in Marketing Through the Pandemic