NAPERVILLE, Ill. -- Eby-Brown Co. earned significant headlines recently for its purchase of competitor Liberty USA. The acquisition sets up the convenience-store distributor for significant expansion in the East. 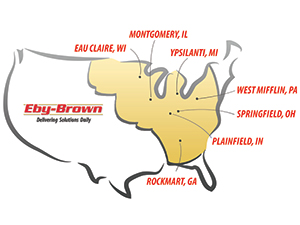 But that deal is just the first part of a dramatic expansion strategy that could take Eby-Brown down into Texas, across the South and up the East Coast in the next couple of years.

“We’re moving full-speed ahead to expand to the South and the Northeast,” said Tom Wake, co-president of Eby-Brown, in an exclusive interview with CSP Daily News. “Liberty USA is an important acquisition for us, but it won’t be the last.”

“We no longer have to drive from Springfield, Ohio, to Pittsburgh,” said co-president Dick Wake, underscoring a significant benefit of the Liberty USA acquisition. And with many of its customers—c-store retailers—expanding their own market areas, the move to the East allows Eby-Brown to expand with them.

But that Northeast growth is just one part of Eby-Brown’s expansion plans. The distributor is just weeks away from announcing the location of what will be its eighth distribution center (including the recent addition of Liberty USA’s Pittsburgh facility). That planned 300,000-square-foot distribution center will open the company to growth in the South.

“We’re putting up a big empty box down there that we’ll fill with convenience products and foodservice solutions,” said Dick Wake.

“We haven’t yet selected a final site,” Tom Wake added. “We’re looking in the Indiana-Kentucky-Tennessee corridor for the right location. But we’re narrowing it down and should have a site very soon”

With construction scheduled to begin this spring, the new distribution center would begin operating in 2017. 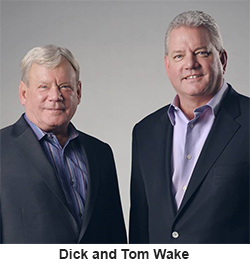 “Once we have that established, it paves the way for us to move into Texas in the South, then sweep east and north from there,” Tom Wake said. “Obviously, contiguous growth will be our best opportunity, so we’re looking at Georgia and the Carolinas and into New York.”

Ultimately, though, Eby-Brown will grow where its customers grow. “We’re talking with our current customers to talk about where they expect to grow,” Tom Wake said. “From that we can look at the best moves for us.”

In the meantime, the Wakes are working to integrate Liberty USA, which it purchased in late February, into the company. Upon completion of the sale, Liberty will be known as Liberty USA, a Division of Eby-Brown.

“We’ve known the Liberty USA folks as competitors for a long time. They’ve done a lot of good things for their customers,” Tom Wake said. “We knew that we needed to do something to expand to the east in the near term, and with some overlap of markets, Liberty made sense.”

To that end, Eby-Brown will keep Liberty USA general manager Gary McGuirk Jr. on staff to maintain operations in the Pittsburg facility after the transaction closes.

“Eby-Brown and Liberty USA have both been industry leaders for quite some time," McGuirk said. "Combining the many years and expertise of these two companies will be an unbeatable proposition for convenience retailers.”

After that, the first step toward integration will be sharing technology.

Eby-Brown’s mobile solutions have been a boon to its customers, offering real-time data and analytics. The company will move those capabilities to Liberty USA’s facilities and clients while borrowing the best of Liberty’s capabilities to share companywide.

Next will come a comparison of foodservice offers.

“Foodservice will continue to be our primary investment for the long term,” Dick Wake said. “We’ve got a food lab in our corporate office and foodservice experts in each distribution center. And Liberty was very good at this in their own right, so we’re very anxious to compare notes and expand the best programs to the entire company.”

Even with the integration of Liberty USA and the distribution-center project keeping them as busy as ever, the Wake brothers said they are anxious for what’s next.

“We look at the Liberty USA deal as two families coming together,” Tom Wake said, “and we’d certainly like to have more people join our family.”