PORTLAND, Ore. -- Green Zebra Grocery has announced a third Portland, Ore.-area location for its healthy "convenience" grocery stores that are under development this year. In addition to the existing Kenton and Woodstock neighborhood locations that it announced in January, the company confirmed it has signed a lease in Richmond/Mount Tabor's Division Street area. 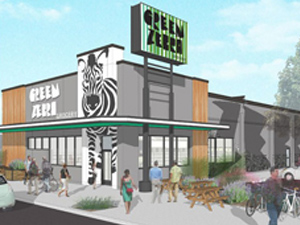 CEO Lisa Sedlar, former president and CEO of the New Seasons Market grocery chain in Portland, stepped down last November to launch the new venture. She is also a trained chef. Sedlar is deeply involved in the community, serving on the boards of the Oregon Food Bank and All Hands Raised.

Green Zebra is aiming to have the store open mid-2014. The small-format stores will focus on fresh, local and healthy offerings in produce as well as their deli, grab-and-go and butcher counters. Additionally, their grocery aisles will feature a selection of the most frequently needed daily grocery items with local offerings, as well.

Green Zebra will be connecting with neighbors in the Richmond/Mount Tabor area to learn what will bring value to their community and look forward to sharing plans for the store in the coming months, Sedlar said.

"In the three months since we've announced our plans for Green Zebra Grocery, we've received an enormous amount interest and support from neighbors and the community," Sedlar said. "We believe the Richmond/Mount Tabor neighborhood is ripe for our healthy, convenient store model that supports the '20-Minute Neighborhood.' We offer eaters the opportunity to shop for all of their needs within a short bike ride or walk from their home."

Green Zebra Grocery plans to open several more stores in the Portland area and in other communities that need greater access to healthy food.