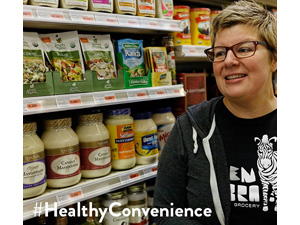 It is a $2 million conversion of what was a Chinese restaurant, reported KGW-TV. The concept is about convenience; a corner neighborhood store that provides a healthy menu and all the essentials. There is a kitchen for making soups and other deli items, butcher shop and a selection of fish. There's also local wine and beer, and Kombucha tea on tap.

"For us, this is what it means to be a convenience store," Sedlar told the news outlet. "Not the rolling hotdogs, the cigarettes or the lottery tickets. It's about health. We're redefining the American convenience store."

The store is designed for a "20-minute neighborhood," said the report, where residents bike or walk to do most of their shopping. There's a bike fix-it vending machine in case of a flat. There are cargo bikes to loan. A bike-up window opens at 7:00 a.m. for coffee or for a gallon of milk.

Around 70% of the store's inventory is regionally sourced and those using food stamps will get a 7% discount, said the report.

Two other Green Zebras are planned for next year in the Woodstock and Richmond neighborhoods.