LA CROSSE, Wis. -- Kwik Trip Inc. has joined theNational Clean Fleets Partnership and has announced its next series of locations for the continued development of alternative fueling infrastructure for natural gas vehicles (NGVs). Kwik Trip plans to add 11 stations to the current group of nine that are already offering compressed natural gas (CNG). 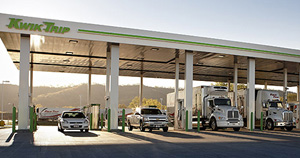 It has begun construction on some sites, it said.

In addition to the CNG infrastructure, Kwik Trip is developing a liquefied natural gas (LNG) corridor that will run from the Twin Cities to the Wisconsin-Illinois border.

Kwik Trip plans to expand availability throughout its current network of stores as well as building new fueling locations. This will allow Kwik Trip to provide the best and most functional natural gas vehicle fueling infrastructure possible.

Kwik Trip believes that, in order to be successful, it needs to drive both natural gas vehicle (NGV) adoption and simultaneously build a functional infrastructure for its guests. Kwik Trip will leverage its vertical integration model to help foster the growth of NGVs in its market. Kwik Trip's own distribution fleet, Convenience Transportation, travels 18 million miles on an annual basis. Through this fleet, all classes and sizes of vehicles are being tested, evaluated, and promoted, based on the company's real world experiences.

"Kwik Trip owns and operates over 30 NGVs, ranging from light-duty vehicles to heavy-duty Class 8 semis," alternative fuels superintendent Joel Hirschboeck said. "In addition, we will take delivery of nine more natural gas semis this spring. Through our own anchor fleet, we have been able to test and promote NGVs and educate Kwik Trip consumers about the benefits of natural gas as a vehicle fuel. Kwik Trip's goal is to market the knowledge that it acquires from purchasing, operating, and maintaining its own NGV fleet."

Kwik Trip will host educational seminars in markets where it is developing natural gas fueling infrastructure.

"The seminars are an excellent opportunity for fleet owners and operators to learn about natural gas as a vehicle fuel and to network with individuals involved in the natural gas industry," Alternative Fuels Coordinator Ruanna Hayes said.

La Crosse, Wis.-based Kwik Trip is the one of the largest convenience store chains in the upper Midwest. It operates more than 400 stores in three states: Wisconsin, Minnesota and Iowa.