NEW YORK -- More than 120 people have gone to the emergency room in New York City between April 8 and April 15 as a result of the use of synthetic cannabinoids, the New York City Department of Health said in issuing a warning to consumers not to use the substance also known as "synthetic marijuana" or "spice." 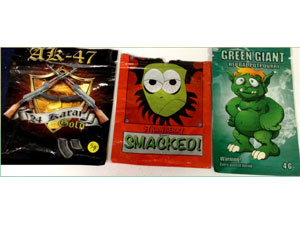 The number rises to more than 160 statewide, said an alert by Governor Andrew Cuomo's office.

"People can buy synthetic cannabinoids in head shops, convenience stores and on the Internet," said the agency.

During the first few months of 2015, an average of two to three synthetic-marijuana related emergency department visits occurred each day, according to the Health Department.

Most of the cases were in East Harlem. The median age of cases is 35 years old, and almost 90% of cases are male.

"In response to this troubling increase in emergency department visits, the Health Department will issue Commissioner's Orders to stores in East Harlem and surrounding areas to remind owners that it is illegal to sell synthetic cannabinoids in New York City," the agency said.

"Despite what the package might say, there's no way of knowing exactly what synthetic marijuana contains," said Health Commissioner Dr. Mary T. Bassett. "The consequences of using synthetic marijuana are unpredictable, and I urge people not to use these dangerous and illegal drugs."

In August 2012, the New York State Department of Health issued regulations banning the sale and possession of dozens of substances used to make synthetic cannabinoids and bath salts. The regulations also allowed an owner of an establishment or an employee selling synthetic drugs to be charged with possession of an illicit substance, which is punishable with a fine up to $500, or 15 days in jail, or a civil penalty of up to $2,000 per violation.

Some synthetic cannabinoid users develop extreme anxiety, confusion, sedation, paranoia and hallucinations. Other reported effects include rapid heart rate, vomiting, seizures and fainting. Synthetic cannabinoids can also cause kidney failure, raise blood pressure and reduce blood supply to the heart. In a few cases, it has been associated with heart attacks. Heavy users may also experience withdrawal and craving.

The Health Department urges New Yorkers who see synthetic cannabinoids for sale to report it to 311. The department will work with other City agencies to investigate these reports.

Use of Synthetic Marijuana, 'Bath Salts' Declines Among U.S. Teens