YORK, Pa. -- Rutter's Dairy has made several healthy, customer-friendly changes to its milk, cream and tea beverages to further improve the quality of the products. Among the changes is the elimination of high-fructose corn syrup from Rutter's chocolate milk. 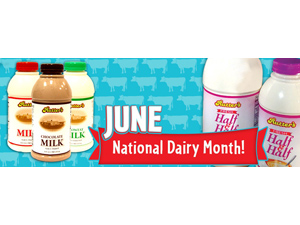 Natural sugar has also replaced high-fructose corn syrup in several of Rutter's iced tea products. Rutter's Green Tea, Orange Tea and Lemonade were improved by making the switch to natural sugar. Rutter's also introduced a brand new product, Half & Half Tea, half lemonade and half iced tea, which it created using natural sugar as the sweetener.

Rutter's also added fresh pasteurized Half & Half cream to its product line. The existing Rutter's Half & Half cream is ultra-pasteurized, which allowed the cream to be sold for up to 65 days from the date of its production. The new, fresh-pasteurized product has a sell-by date 17 days from its production, the same as Rutter's milk products. Fresh pasteurization allows the product to be bottled in its purest form, just milk and cream, without the use of stabilizers or preservatives.

The recent changes to these products ushered in changes to the containers in which each is sold. The company has altered both the shape and opacity of the bottles, making Rutter's Dairy the first in central Pennsylvania to switch to clear plastic packaging. The new clear quart bottles resemble the old-style glass milk bottle, while providing the lightweight recyclability of plastic.

Todd Rutter, president of Rutter's Dairy, said that giving consumers the ability to see the product they're purchasing is the sole reason for the change to the bottle.

"We've been told many times over the years that we have the best chocolate milk in the world, we thought it was time to change our packaging a bit to better show it off to the world," he said.