NEW YORK -- "Increasingly, access is becoming more important to customers," Bill Simon, president and CEO of Walmart U.S. for Wal-Mart Stores Inc., told attendees of the Goldman Sachs Global Retailing Conference in New York on Sept. 11. "And we believe we have an opportunity today through multiple formats to take our brand closer to the customers and to deliver that Walmart promise about everyday low pricing and access to the products that customers want in multiple formats across the U.S." 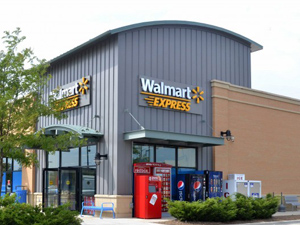 Earlier this year, he said that Wal-Mart plans for smaller-format locations to account for 40% of its new store openings in the next fiscal year.

At the Goldman Sachs conference, Simon said that while the supercenter--the destination for the consumer "one-stop" and "stock-up" categories--remains the Bentonville, Ark.-based retail giant's main store format, it is seeing more opportunities for its stores with smaller footprints, which include the medium-format Neighborhood Market and the small-format Walmart Express and Walmart on Campus.

Simon stressed how "pleased" company executives are with Walmart Express, which is "really performing well."

The 20-unit pilot phase of Walmart Express is seeing "mid-double-digit" comps, he said. The stores are approximately 10,000 to 12,000 square feet in size, although the company has tested them as high as 15,000 square feet.

The company's "ability ... to assort that same amount of square footage compared to a competitor in that space is ...100 fold, because we have an understanding of what everybody in that zip code buys online through Walmart.com, buys in bulk through Sam's Club, buys at the Supercenter down the road and can assort the store ... so that it feels like a much, much bigger store. So 'magically,' we know exactly which SKUs are bought in that particular geography because of our ability to understand the data. We think that gives us a competitive advantage that others would really struggle to get to."

In the context of the Walmart Express, the retailer is discussing a new method of distribution "that could be game changing for [smaller] formats."

According to Simon, "the Supercenter created that stock-up trip--that one-stop shopping trip --20 years ago. [But] frankly drug and dollar now have taken and created a kind of this quick trip fill-in occasion that is fascinating to us, which is one of the reasons we are evaluating how to respond to that with smaller stores. So competition in retail in the U.S. is better than it has been, and I think better competition will make us a better retailer."

Asked what Wal-Mart in its various formats is doing to try to capture the small-basket convenience trip, Simon said, "The supercenter is a stock-up occasion, it is a commitment. We talk about it that way that from the minute you decide to put your blinker on to turn into the supercenter, you've got to be committed because it's going to be a big store ... a big parking lot. It's always crowded; thankfully, always crowded. And you've got to find what you want at the best possible prices, so assortment and price. But it doesn't lend itself naturally to convenience. You can be convenient in the context of one-stop shopping, but the abundance of small stores that have sort of popped up over the last five years have given a new dimension to convenience, particularly when it comes to those core items. And that is one of the things that we have to figure out in the long run how to deal with."