BENTONVILLE, Ark. -- In what he called "a very rapid ramp-up," Bill Simon, president and CEO of Walmart U.S., said Wal-Mart Stores Inc. plans for smaller-format locations to account for 40% of its new store openings in the next fiscal year. 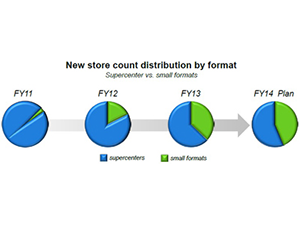 Speaking at the Raymond James 34th Annual Institutional Investors Conference on March 5, Simon detailed a strategy of "evolving [the company's] real-estate portfolio to reach more customers." That means ramping up its presence with its Neighborhood Markets and Walmart Express locations.

Wal-Mart is planning 95 to 115 small-format stores for fiscal year 2014, which will account for 40% of new openings, Simon said. It added 76 small-format units in fiscal year 2013; traffic was up more than 2% every quarter in that period for Neighborhood Markets across all geographies. For the Walmart Express locations, the company reported double-digit positive comparable sales and positive traffic every quarter, with strong growth in prescription drugs.

By fiscal year 2016, the company predicts it will have 500 Neighborhood Markets across the country, representing more than $10 billion in sales.

"The idea is that we can expand our reach and deliver our 'everyday-low-price' [EDLP] promise to customers wherever they might be," Simon said.

He said that the smaller-formats "compete really well against multiple channels," naming drugstores, grocery stores and dollar stores. But he did not specifically mention convenience stores.

All of the Walmart Express stores and Neighborhood Markets have what the company calls Site to Store. It means that a customer can order something from Walmart.com and have it delivered to that smaller-format store. This creates, Simon said, "that endless aisle."

He cited sales figures from a Neighborhood Market in downtown Chicago: At certain times of the year, the store does 20% to 25% of its business through Walmart.com Site to Store.

"We can deliver price and assortment and fresh food and RX, and the Wal-Mart EDLP promise, and then give you anything that we can get online, in the store--that digital capability is a deal breaker," he said.

Wal-Mart is undergoing what it calls a "market density test" of its Walmart Express format in North Carolina. Ten of the stores there are less than 20,000 square feet; all of them include "localized products," pharmacies, financial services, fuel and Site to Store capabilities.

Wal-Mart announced separately on Wednesday that a new Walmart Express location will open March 20 in Benson, N.C., about 20 miles south of the Raleigh-Durham area. The 12,000-square-foot store includes a pharmacy, along with general merchandise, grocery, dry goods, consumables, produce, dairy, meats and health and beauty care (HBC) and over-the-counter (OTC) items. It also will offer the free Site to Store service.