LAVAL, Quebec -- Some industry observers and analyst expect Alimentation Couche-Tard Inc. to make a play to expand its already large U.S. presence after Hess Corp. moved Wednesday to spin off or sell its retail convenience store network, the fifth-largest in the United States, reported the Canadian Press. 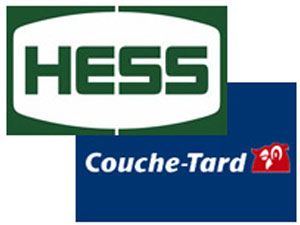 The possibility echoed speculation voiced in early 2013 when Hess announced that it was looking to shed its downstream businesses to become a pure-play exploration and production (E&P) company.

In a filing with the U.S. Securities & Exchange Commission (SEC), the oil company said it will either distribute the business to shareholders in a tax-free spinoff or sell the business.

New York City-based Hess is the largest owner of c-stores along the U.S. East Coast, with operations in 15 states and Washington, D.C. As of Sept. 30, it operated 1,258 stores, including 81 travel plazas and 1,177 convenience stores. Its largest markets are North Carolina, Florida and New York. It also has 96 locations operated by franchisees.

Couche-Tard CFO Raymond Pare declined to comment on a possible bid for Hess, but told the news agency that the company has "the capacity to do any transaction with our strong balance sheet."

Analyst Derek Dley of Canaccord Genuity said Couche-Tard can financially support a deal in the $1.5 billion (U.S.) range after reducing its debt from the $3.6 billion cash and debt purchase of Europe's Statoil Fuel & Retail. He said Hess would be very attractive and help to bolster its presence in the U.S. Northeast, where it operates Circle K stores.

"When assets like this come up for sale, which isn't very often, you need to be opportunistic," he told CP.

But Dley said he expects there will be many Hess suitors and that Couche-Tard will live up to its reputation of not chasing an acquisition or of overpaying.

Other suitors previously rumored to be interested in the Hess retail network include B.J. Wholesale Club and Marathon Petroleum (Speedway).

Analyst Peter Sklar of BMO Capital Markets said Couche-Tard's interest in Hess would be consistent with the consolidation of the North American c-store industry.

"We believe this is a potential positive development for Alimentation Couche-Tard," he wrote in a research note cited by the news agency.

In June, Sklar said the acquisition of Hess's retail operations would increase Couche-Tard's earnings by as much as 69 cents per share as of fiscal 2016, assuming a $2 billion purchase price.

Hess has 14,600 employees, including 8,600 people who work full-time and 500 working at its corporate and field offices, said the report. Its unionized employees work under three collective agreements.

Laval, Quebec-based Alimentation Couche-Tard is one of North America's largest convenience store operators with 6,207 locations and more than 60,000 employees operating under the Couche-Tard, Mac's and Circle K brands. In Europe, it operates 2,276 Statoil Fuel & Retail stores across Scandinavia, Poland, the Baltics and Russia, with 18,500 employees.